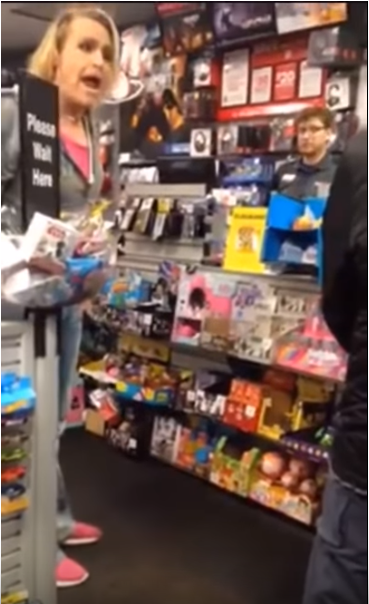 A transgender shopper went volcanic on a game store worker when the employee used the wrong title to address her.

The unidentified woman exploded on the male employee, who made the innocuous error of addressing her as “sir” instead of “ma’am” at a GameStop in Albuquerque, New Mexico. The transgender customer had just purchased an item when the fireworks popped off.

Because the transgender woman considered “sir” an indignity, she demanded her money back.

“I don’t want credit, you’re going to give me my f—ing money back,” the customer fired off at high decibels, according to Christian Journal Media.

At one point, the transgender customer even demanded the male shop employee walk outside with her so that she could show him what “a sir” really is.

After the customer finished her rant, she stormed toward the door and deliberately toppled a display of toys. But she was just getting started because she then walked back toward the counter to continue the tirade.

The transgender woman railed once again about the male store clerk misidentifying her gender. She also demanded to have the company’s corporate number in order to file a formal complaint.

A female customer stepped in and tried to defuse the situation by offering to call the police, but she also called the woman “sir,” which further enraged the transgender woman.

The female customer said: “Excuse me, sir, there is a young man in here. You need to watch your mouth. I can call the police if you would like me to. You need to settle down.”

The angry transgender woman roared back, “Excuse me, it is ‘ma’am. It is ma’am. You need to settle down and mind your own business.”

When the male clerk tried to intervene and calm the pair down, the transgender woman thought he called her “sir” yet again, and she wailed at the top of her voice: “Motherf—–, take it outside if you want to call me sir again. I will show you a f—ing sir.”

The blonde transgender woman, wearing a grey hoody and blue jeans, then finally stampeded out.

You can see the captured footage on Christian Journal Media’s YouTube page below: