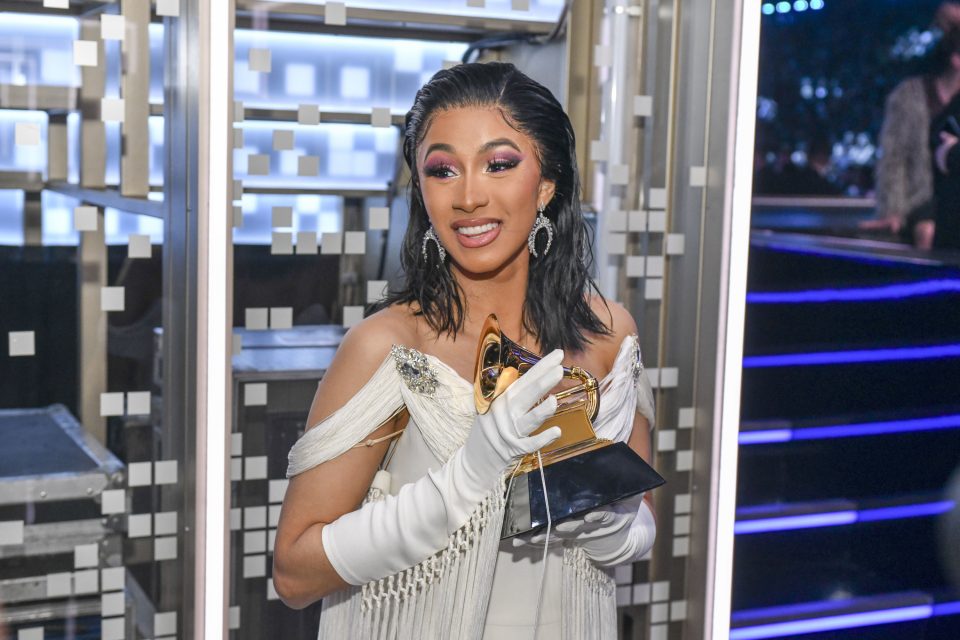 Cardi B is seen backstage after winning album of the year at the 61st annual Grammy Awards at the  Staples Center in Los Angeles, Sunday, Feb. 10, 2019. (Photo credit: Timothy Kuratek/CBS ©2019 CBS Broadcasting, Inc. All Rights Reserved.)

Heads are rolling like bowling balls over at Black Entertainment Television (BET) after Nicki Minaj canceled a scheduled performance for BET Awards weekend. The network posted a tweet blasting Nicki while simultaneously celebrating her rival Cardi B’s historic win at the Grammys, which is tantamount to spitting in Nicki’s face. 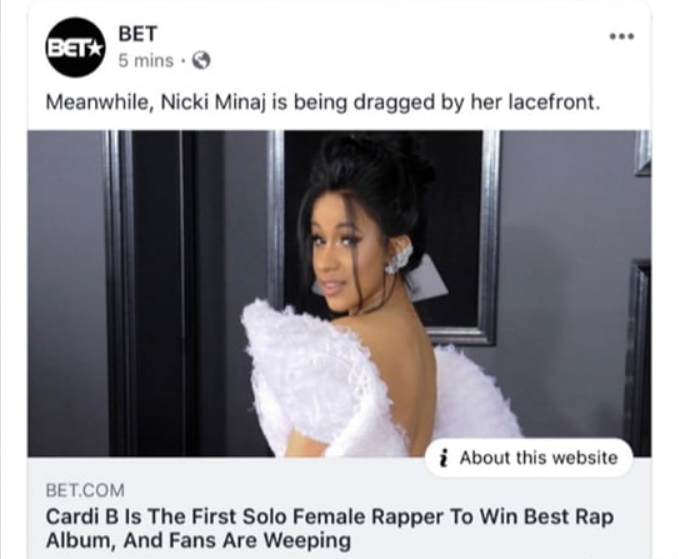 In fact, folks over at BET are ducking for cover as Nicki and the entire Young Money crew of Cash Money Records decided to boycott the BET Experience, an elaborate music extravaganza that takes place every June during BET Awards weekend in downtown Los Angeles. It was scheduled to be co-headlined by Nicki Minaj and Cardi B.

The Pink Barbz took to Twitter to get some payback for a Twitter post that a BET staffer posted about Nicki Minaj without being cleared first from the network’s executive ranks.

BET is in “custodial” mode right now, mopping after a low-level staffer allegedly pushed the send button on the inflammatory tweet. Moreover, BET social media sites got trampled by a stampeding herd of outraged Nicki fans, for which the “Moment 4 Life” femcee showed gratitude.

“I can’t thank you guys enough for all the love & support you continue to show me,” she tweeted. “To everyone who said something sweet, thank you. Whether I read it or not, I felt it. From the bottom of my heart. I love you so much. So so so soooo much. Stay tuned. (sic)”

After huddling amongst themselves, BET brass has emerged and issued a statement to let Nicki Minaj and the world know that they did not give the green light to the insulting post and to 0pledge their undying love for the Queen emcee.

“BET loves Nicki Minaj. We have supported her from the very beginning of her career and will continue to do so moving forward. Nicki has paved the way for so many performers and has solidified her place as one of the most powerful figures in the music industry,” the statement reads, according to TMZ.

“Unfortunately the respect we have for Nicki was violated by this post that should never have been written. The post does not reflect how we feel about Nicki and further does not reflect our company values. We deeply apologize for the hurt, disappointment and confusion that this post has caused. We are committed to doing everything we can to address the situation.”

BET is trying to see if they can salvage its valued relationship with Minaj by ensuring that such an occurrence is never repeated.

“We are also conducting an internal audit to assure these types of posts are not published again,” the statement reads as posted by TMZ. “We have apologized to Nicki and her team. The post has been removed, and we have taken additional appropriate action. We understand Nicki’s position and look forward to continuing our dialogue with her. Finally, we apologize to all of her fans. This should have never happened.”