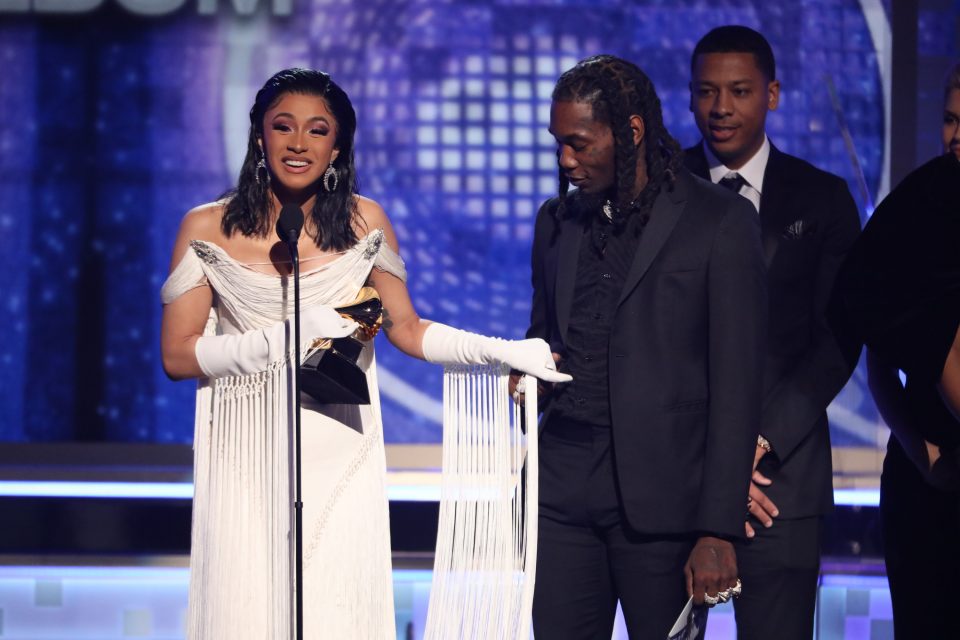 Cardi B accepts the award for Best Rap Album, with husband Offset by her side, at The 61st annual Grammy Awards at the Staples Center in Los Angeles, Sunday, Feb. 10, 2019. (Photo: Monty Brinton/CBS ©2019 CBS Broadcasting, Inc. All Rights Reserved)

Cardi B was joined on stage by Offset when she picked up the Grammy Award for Best Rap Album on Sunday, Feb 10, 2019.

The 26-year-old star recently reunited with her Migos rapper husband following a brief split. The two showed just how inseparable they are, as he accompanied her to the podium at Los Angeles’ Staples Center, where she accepted the prestigious award for her LP Invasion of Privacy.

Cardi was visibly emotional as she took to the stage and she joked: “Ooh, the nerves are so bad. Maybe I need to start smoking weed!”

The “Bodak Yellow” hitmaker went on to pay tribute to her 7-month-old daughter Kulture and those who pushed her to complete the record during her pregnancy.

She said: “I want to thank my daughter. I’m not just saying thank you because she’s my daughter. It’s because, you know, when I found out I was pregnant, my album was not complete.

“I had like, three songs that I was for sure having — you know how it was. We was like, ‘We have to get this album done,’ so I could shoot the videos while I’m still not showing. It was very long nights.”

Cardi also thanked a number of artists, including Chance the Rapper, Migos and SZA for contributing to her success.

She grew tearful as she said: “I want to thank all the artists that took their time and their verses for my album.”

The rapper ended her speech by praising her husband.

She said: “He was like ‘You gonna have this baby and you gonna make this album.'”

Earlier in the evening, Cardi wowed the crowd with a performance of “Money” on a lavish, cushioned, lounge club set.