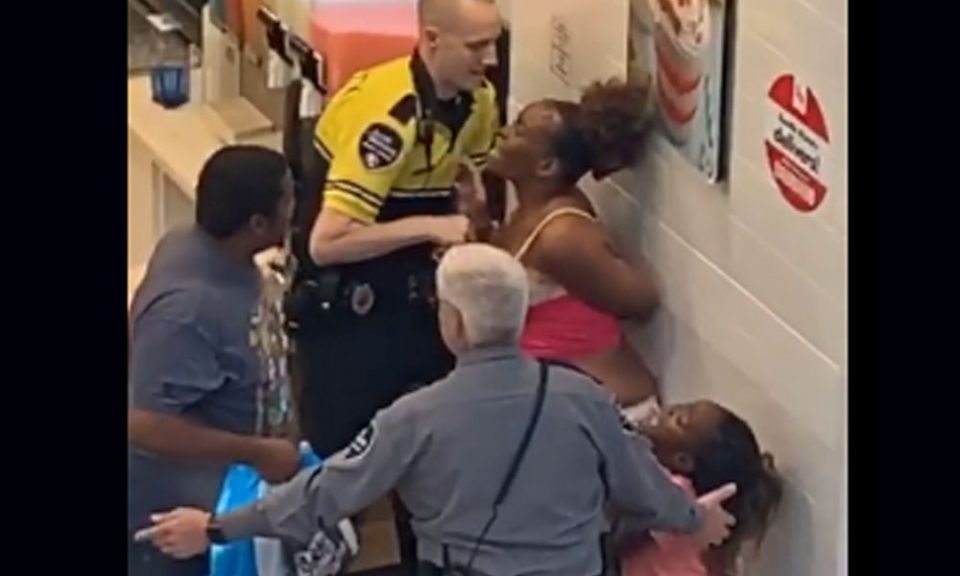 A violent incident at a Texas mall has many people questioning the use of force by a mall cop. A video was posted to Facebook that shows a mall security guard, violently trying to arrest a woman who is very pregnant in the company of another small child and a male companion.

According to a Facebook post, the woman was complaining to an Auntie Anne’s food vendor at the Hulen Mall in Fort Worth, Texas. The soon-to-be-mom was trying to get a refund for her purchase. The woman complained that her hotdogs were burned, but the cashier refused to give her a refund and mall security was summoned. Instead of trying to defuse the situation, the unidentified security guard proceeded to arrest the woman and attempted to place her in handcuffs.  The pregnant woman fought back against the restraints and her male companion attempts to intervene as her small child screams in fear. At one point the guard maced the woman in her face.

The video has gone viral and now that mall security guard is out of a job. According to WFAA-News,  Hulen Mall officials stated that the security company, Allied Universal, was at fault. In a statement, they said the guard was terminated  because he “did not use the correct protocol in dealing with one of Auntie Anne’s customers.”

The woman was not injured in the attack and local police have not filed any charges against her or the security guard.


Posted in News2 and tagged assault, fort worth, refund, Texas