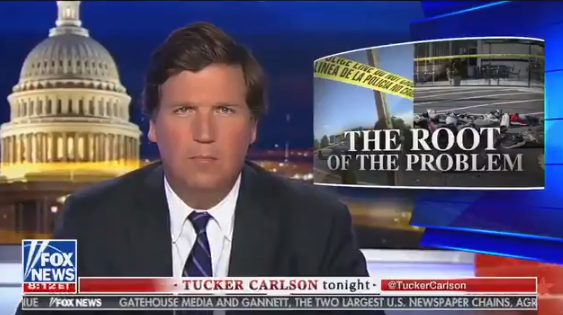 Fox News host Tucker Carlson went on a tirade on his show last night (Tuesday, Aug. 6, 2019), saying the claims of a rise in White supremacy and violence are a “lie” and a “hoax.”

Carlson, a famous right-wing political commentator, told his audience that White supremacy is not really a “problem in America” and that the claims are being used to help those in power maintain their grip on the country.

The white supremacy problem “is a hoax. Just like the Russia hoax. It’s a conspiracy theory used to divide the country and keep a hold on power.”

Carlson’s outlandish statements come after three White supremacy terroristic acts occurred in one week. At the end of July, one gunman killed three people at the Gilroy Garlic Festival near the San Francisco-San Jose area. A week later, one gunman shot 20 people to death at a Walmart in El Paso, Texas, and a few hours later another white gunman killed nine and injured dozens of others in downtown Dayton, Ohio.

Incredulously, Carlson countered authorities’ claims of increased White nationalist terrorism, saying that it’s “actually not a real problem in America. The combined membership of every white supremacist organization in this country would be able to fit inside a college football stadium.”

Jonah Goldberg responded on Twitter with this warning for Trump, a known fan of Fox News: “If Trump apes these talking points, it’ll be awful for the country and devastating for Trump’s presidency.”

Check out Carlson’s take on White supremacy and the escalating acts of terrorism and mass shootings in America below:

Tucker Carlson: White supremacy is "actually not a real problem in America." Calling white supremacy and issue is "a hoax" and "a conspiracy theory used to divide the country" pic.twitter.com/ydzmJ0L7UI