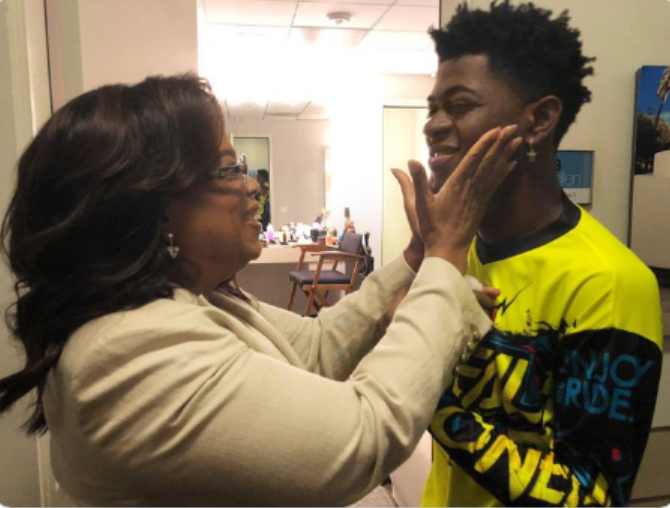 Rapper Lil Nas X is learning there are perks that come with having a record-breaking song.

The “Old Town Road” architect is enjoying the trappings of fame as he shared with his five million Instagram followers about meeting beloved billionaire Oprah Winfrey.

Lil Nas X, whose was born Montero Lamar Hill in Atlanta, got the thrill of a lifetime when, backstage at the “Ellen Degeneres Show,” Oprah gently cradled the 20-year-old rapper’s cheeks in her hands. As Nas writes on Instagram:

His cheeks are not being pinched, per se, in this photo, and we don’t know if she actually did or not, but who cares? That is the one and only Oprah Winfrey, and that’s all that matters to Lil Nas X.

Lil Nas, as most music fans know, now holds the all-time Billboard record for a song staying at No. 1 for 17 consecutive weeks.

“Old Town Road,” which features Billy Ray Cyrus, displaced the songs “One Sweet Day” by Mariah Carey and Boyz II Men, which was No. 1 for 16 weeks back on Dec. 2, 1995, and “Despacito” by Luis Fonsi and Daddy Yankee feat. Justin Bieber, which also stayed at the top of the pop charts for 16 weeks two years ago (May 27, 2017).

Such distinctions will earn you a seat on the most popular daytime time talk platform, the “Ellen Degeneres Show,” which is scheduled to air on Monday, Sept. 23 as Degeneres announced to her 77 million IG followers.