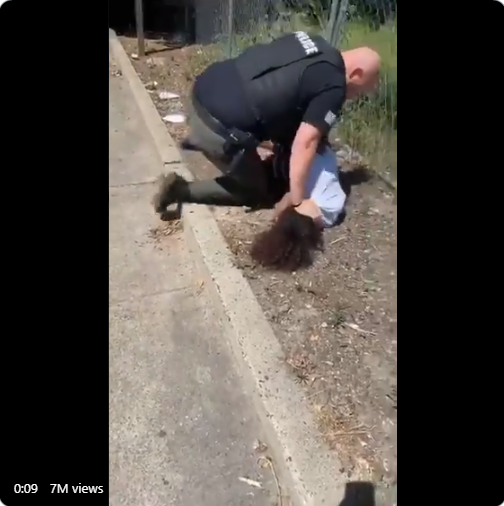 Footage from a video released to the public on Tuesday, April 28, shows a Black teenaged boy being manhandled and punched by a White officer in Northern California. Rancho Cordova police officer, Brian Fowell, reportedly approached 14-year-old Elijah Tufono and questioned him, then ultimately detained him for carrying a tobacco product in plain sight.

According to multiple news outlets, Tufono asked an adult stranger to purchase the tobacco for him and was ultimately found out by Fowell, who was cruising the street.

Things went from bad to worse when Tufono told the officer that he was 18-years-old and refused to identify himself. A struggle ensued that found the officer on top of Tufono, pinning him and manhandling him. The footage, which went viral, shows Fowell striking Tufono in the body multiple times as he struggles to gain control.

“He’s on top of me and it looks like he’s about to hit me,” Tufono told FOX40. “Like, I’m reacting like any other normal human being would. It could’ve been better on both of our parts in this situation.”

Tufono admitted his wrongdoing but did not exactly absolve the officer of his abusive behavior.

“I did lie to him and I didn’t cooperate, and I know that and I made that mistake. But that didn’t give him no right to do what he did,” said Tufono.

The Sacramento Sheriff’s Officer released a statement on behalf of the Rancho Cordova Police Department that reads in part:

“It’s important to put video footage into context, especially in relation to a use of force incident. In this case, the deputy saw what he believed to be a hand-to-hand exchange between an adult and juvenile. As the deputy turned around, he lost sight of the adult, who left the area. When the deputy approached the juvenile, the juvenile was uncooperative and refused to give the deputy basic identifying information.”

After being placed in the squad car, Tufono was ultimately cited and released.

“I mean, I do forgive him. I have nothing against the cop. He was just doing his job, I guess,” said Tufono.

Tufono remained a class act after what could have been a tragic story, passing on a message to the officer through FOX40.

“Sir, I’m sorry for the way that I acted towards you and for not cooperating. And I just hope that we could meet again and be on better terms,” said Elijah.

Click through to see the video of Tufono being detained.