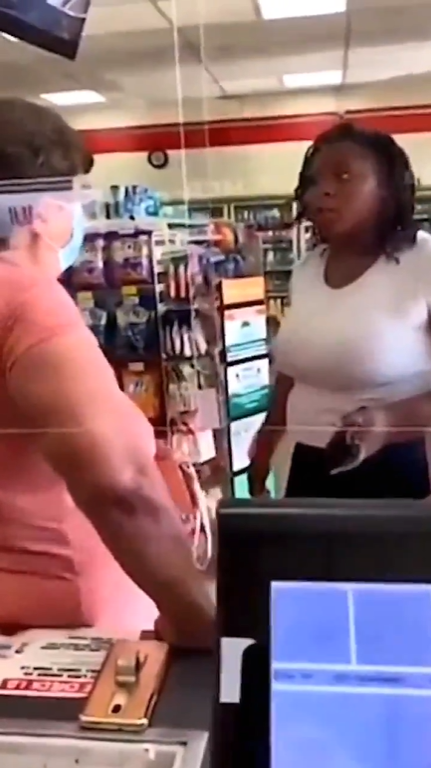 Two 7-Eleven shoppers in Sacramento, California were involved in an altercation that left one middle-aged White woman on the floor and in need of medical attention.

Video footage of the incident was captured on June 22 and has since gone viral.

It is unclear how the argument started nor how it got out of hand. What is clear, is that White woman “Karen,” whose government name has yet to be revealed, took it upon herself to accept a challenge from a younger Black woman, who coincidentally calls her “Karen” while telling her to “watch her mouth,” multiple times.

Based on the audio of the incident, there was a brief exchange in an aisle that triggered this White woman’s worst nightmare. The words “excuse me” were allegedly uttered by “Karen” during their initial exchange. She says this repeatedly in the recorded footage, which means nothing to her younger opponent.

At some point during the confrontation, while “Karen” goes between facing the register and responding to the Black woman, she is prompted to say the N-word “again.”

“Call me a n—– again,” says the Black woman with what appears to be a cell phone and a purse in her left hand.”Try it. I promise you I’m the right one… I will beat yo a–. Say n—– again.”

With that, “Karen” accepts the challenge and with her right hand, the Black woman lands several punches on Karen’s face while pummeling her to the floor.