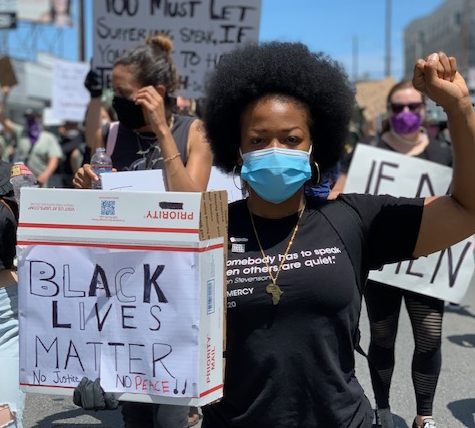 (Photo: provided for by Nia Miranda)

Nia Miranda understands that progress can only be made with a collective effort. The self-described “artivist” stands as an import voice as rallies and protests continue to take place across the country.

However, Miranda, who was raised in Detroit before moving to Los Angeles to pursue a career in acting, does her part in making sure the focus is not lost.

During the video, Miranda checked two White women for being disruptors.

“This is not a Black woman who is putting ‘Black Lives Matter,'” Miranda said while focusing her camera on the woman doing the spraypainting. Miranda approached the two White women and told them, “Y’all doing that for us, but we didn’t ask you to do that…Don’t spray stuff out here when they’re going to blame Black people for doing it. If we wanted you to do it, we would have asked,” she said. “They’re not going to show your faces when they see that on HBO. They’re gonna blame that on us. Y’all are part of the problem.”

“Before that situation, there were people of all backgrounds coming together, it was one of the most beautiful things that I have ever seen. We’re more unified than the media likes to show. At 3 p.m., the police came out with guns that had rubber bullets and they were spraying us with pepper spray. After running from the police and running into those two women, it made me furious. I knew that if I hadn’t taken the video, someone who looked like me would have been blamed for defacing property. It would have defamed our mission. I couldn’t allow anyone to betray [George Floyd’s] message.”

Miranda had a specific message to the provocateurs looking to disrupt peaceful protests.

“We’re going to continue to fight, but we don’t need anyone going against what we’re doing. [Time’s] up for using our likeness, our talent, our skills to make a profit off our backs, and not stand up for us in our tragedy and pain. Black people are the most forgiving people. In the media, we’re called thugs. We’re fighting for freedom, not revenge. Either you’re going to stand beside us and fight for what’s right, or take your butt’s home. We don’t need you.”