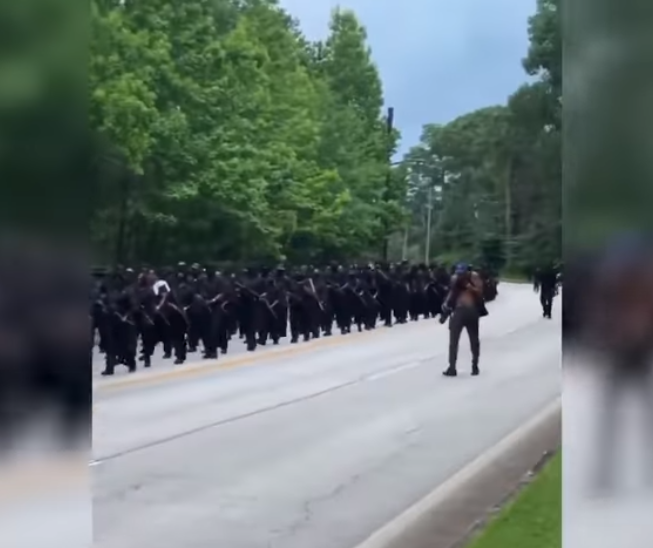 Hundreds of Black militia members marched on the famous Stone Mountain Park in suburban Atlanta on the Fourth of July to protest the permanent carving of Confederate war heroes.

The group, which calls itself the Not F—ing Around Coalition, is demanding the removal of a nine-stories high sculpture of Jefferson Davis, who served as president of the Confederate States from 1861 to 1865, and two Confederate generals, Robert E. Lee and Thomas “Stonewall” Jackson, at the state park in Stone Mountain, Georgia, a 20-minute drive east of Atlanta.

The site is significant because, according to The Hill, the rabidly racist Ku Klux Klan held its rebirth ceremony atop this renowned mountain in 1915 and White supremacists and similar groups reportedly continue to hold rallies there.

The march took place on the Fourth of July holiday and comes amid the national cry to abolish or remove names, emblems and statues dedicated to the Confederacy around the country.

Not F—ing Around Coalition founder Grand Master Jay told Newsweek by phone on Sunday, July 5, that the organization is not affiliated with the more famous Black Lives Matter Movement. “We are a Black militia. We aren’t protesters, we aren’t demonstrators. We don’t come to sing, we don’t come to chant. That’s not what we do,” Jay said.

“Our initial goal was to have a formation of our militia in Stone Mountain to send a message that as long as you’re abolishing all these statues across the country, what about this one?”

The tone of the militia group was not conciliatory or amicable.

“I want the heart of the Ku Klux Klan to hear me no matter where the f— you are,” an NFAC member said in a video. “I’m in your house. Where you at? You made a threat. We don’t threaten.”

Watch a video of the NFAC during its July 4 march below: