A rising rapper in Florida is reportedly facing the possibility of life in prison after he and his crew allegedly kidnapped a couple, stole tens of thousands of dollars and allegedly raped the wife.

Federal authorities believe Splash Zanotti was the ring leader of a three-man crew that broke into their South Florida home of a couple and held them captive for hours, the South Florida Sun-Sentinel reports.

Splash, whose government name is Kejuan Brandon Campbell and his two accomplices, Dionte Alexander-Wilcox and Antonio James, allegedly stormed into the married couple’s Miramar home, a 20-mile drive northwest of Miami, on Oct. 11. The police report stated the three men were armed and wearing masks and told them they were there to collect a debt, though the specifics have not yet been revealed.

The terror reportedly went on all night, the newspaper stated, as the men ordered the wife to drive from one ATM after another to collect approximately $20,000. Once they all returned to the home, one of the men allegedly raped the wife when the husband went to the garage to smoke a cigarette.

No charge of rape has been filed as of yet, but the men were picked up on Dec. 16 and went before a federal judge on Christmas Day. Splash and his crew have been slapped with federal charges of kidnapping and conspiracy to commit kidnapping. These crimes carry a maximum penalty of life in prison if convicted.

One of Splash’s reps posted the following note for the underground rapper’s 110,000 Instagram followers, declaring his innocence. 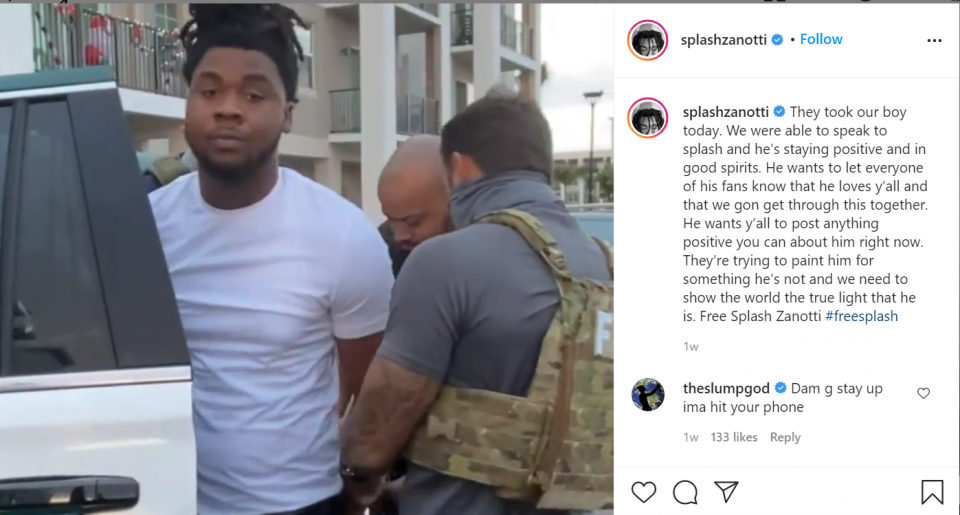