Sharpe took some grief over the way he described HBCUs

Black Twitter took offense to NFL Hall of Famer Shannon Sharpe saying that he only went to an HBCU because he had terrible grades.

Sharpe, who is considered one of the best tight ends in NFL history, created a frenzy on social media just hours after Deion Sanders’ announcement that he was leaving Jackson State for the University of Colorado two years after publicly advocating for HBCUs.

Some fans have called Sanders a sellout for allegedly abandoning the only place that would hire him after his alma mater, Florida State Univsersity, refused to even give him a look.

Sanders ended up taking a head coaching job at an HBCU, Jackson State University, in Mississippi. In three years, Jackson has was won back-to-back SWAC conference championships. But as soon as the confetti deluged the field, Sanders announced that he’s traveling over 1,200 miles to Boulder, Colorado, to take over the University of Colorado head football coaching job.

Black Twitter was highly offended that Sharpe referred to HBCUs in such a negative, “sloppy” way and they let the former Denver Broncos star have it.

An HBCU gave Shannon Sharpe a chance when he used to live in shack and got the nerve to insinuate that he settled for them. Very wild.

That's not the question. Yes or no, do you think Black institutions are a downgrade.

Maybe you wouldn't have made the league if you didn't go to that HBCU.

That Shannon Sharpe tweet about HBCUs was really sloppy

Some interpreted Sharpe’s words differenty and more or less take up for the gridiron legend. 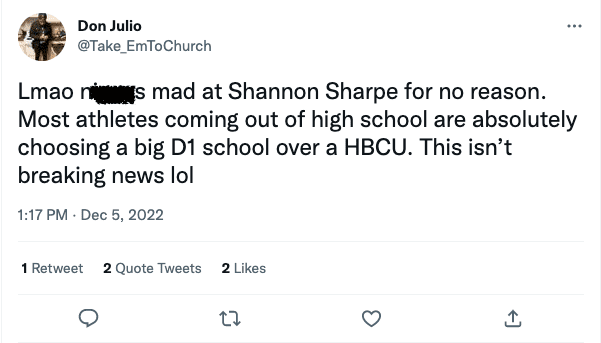 People are fake mad that Shannon Sharpe said the HBCU he attended wasn’t his 1st choice. Y’all are ridiculous 🤦🏾‍♂️. No NFL bound athlete’s 1st choice is a school no NFL players came from. They want to attend D1 schools.