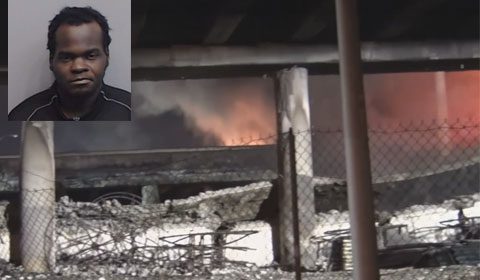 The story of Basil Eleby has now caught national attention. Eleby is the mentally ill homeless man accused of starting a fire that collapsed a section of I-85 in downtown Atlanta. Eleby was singled out as the perpetrator of the fire by two fellow White crack addicts identified as Sophia Brauer and Barry Thomas. The couple claimed that Eleby was supposed to smoke crack with them but he decided to smoke the drug by himself.

According to the Fulton County Public Defender’s office, Eleby intends to plead not guilty to the charges leveled against him for the fire. Since his arrest multiple lawyers and law firms have been attempting to represent Eleby causing an issue with the public defender’s office. A letter from public defender Liz Markowitz, who is representing Eleby at this time, states to the Fulton County Jailer “It has come to our attention that a number of attorneys have been making attempts to speak with our client, Basil Eleby. There are attorneys who are trying to visit Mr. Eleby. And from our understanding, these individuals are not his attorneys. Mr. Eleby has expressed that the number of people attempting to persuade him to change representation has become overwhelming and it basically seeks limits on which attorneys can talk to him and how.”

The Georgia Department of Transportation confirmed that the material stored under the bridge was leftover from a canceled contract. According to GDOT Commissioner Russell McMurry, Smyrna-based contractor TDC Systems Integration defaulted on the traffic management project a few months after being awarded the contract — and after the state paid for the material to be used for it. The next contractor used a different type of conduit for the project, and the decision was made to store the unused materials under the I-85 underpass.

Posted in News and tagged Basil Eleby, bridge fire, GDOT, I-85, not guilty