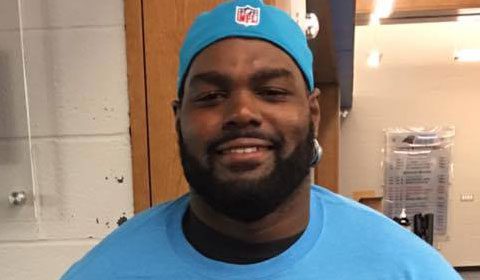 The story of Carolina Panthers offensive tackle Michael Oher was made famous in the 2009 film The Blind Side. Now Oher is due in court for a blindside assault on an Uber driver this week.

On April 14, 2017, Oher and four friends were picked up for a ride to downtown Nashville, Tennessee. According to the driver, he was told to follow another car to the destination, but suggested to Oher the other driver seemed lost and he knew a quicker way. This started a heated argument, where Oher accused the driver of trying to drive up the price of the ride. Oher and his friends decided to go to another late night spot and were in route when two of the passengers needed to use the restroom. The driver stopped the car at a business and opened the door for the passengers when he was physically confronted by Oher.

The driver stated that Oher pushed him to the ground and began kicking him; the friends of the powerfully built NFL star had to restrain him from further striking the driver. According to the Metropolitan Nashville Police Department, Oher has been cited with misdemeanor assault and will appear before the court on May 8.

Oher’s life story was told in the 2006 book The Blind Side: Evolution of a Game by Michael Lewis. As a child, Oher was shuffled through the foster care system and homeless at points in life. The book was made into the film The Blind Side. Actress Sandra Bullock won an Oscar for her role as Oher’s adoptive mother.

Uber is taking a strong stance against customers who verbally assault their drivers so there can be little doubt that Oher may find his Uber privileges canceled.