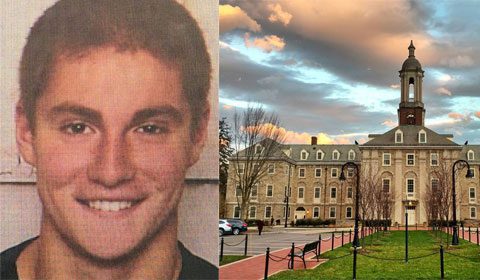 On February 2, 2017, Timothy Piazza, an 18-year-old student at Penn State, participated in what was known as a bid night to pledge Beta Theta Pi Fraternity. The event featured what was known as a gauntlet and the consumption of a massive amount of alcohol. But the night turned tragic and now Piazza is dead and 18 members of the fraternity face of a slew of charges including manslaughter.

For the past several weeks, grand jury testimony was being heard and details emerged of Piazza’s death. According to testimony, planning for the event include purchasing at least $1,179.30 worth of alcohol for the pledge session. The list of alcohol available at the party included cases of Crown Royal, vodka, Natural Light Beer, 15 cases of Four Loko and multiple boxes of wine, according to grand jury testimony. During the gauntlet phase, Piazza and other pledges were made to stop at different stations with brothers of the fraternity and drink large amounts of alcohol. Portions of the night were captured on the surveillance video cameras within the fraternity house. Footage shows Piazza disoriented and stumbling from station to station. In the early morning hours of February 3, 2017, Piazza was so drunk, he fell down a flight of stairs. Despite the serious nature of the fall, brothers of the fraternity taunted Piazza to get up and when he did not, simply laid him on a couch to recover. More video footage shows Piazza getting up from the couch several times and falling once again down a flight of stairs.

This time his injuries were severe enough that fraternity members grew concerned. Instead of calling 911 immediately, they waited 40 minutes before aid was called. In the meantime, a police investigator stated that members of the fraternity were “googling” how to treat a head injury and seemed more concerned about their own culpability rather than the life of Piazza.

Piazza was later transported to the hospital where doctors stated he had received irreversible traumatic brain injury. An autopsy later determined that Piazza’s blood alcohol content was between .28 and .36 percent and he had consumed a life-threatening amount of alcohol. It should be noted that the legal limit for driving while intoxicated is .08 percent.

A total of 18 Penn State students have been charged with various counts related to the death of Piazza. These charges include involuntary manslaughter, aggravated assault, reckless endangerment, and tampering with evidence. Two of the fraternity brothers were charged with 200 counts related to Piazza’s death that included contributing to underage drinking. Eight of the brothers of Beta Theta Pi fraternity appeared in court last week and were released on $100K bails.