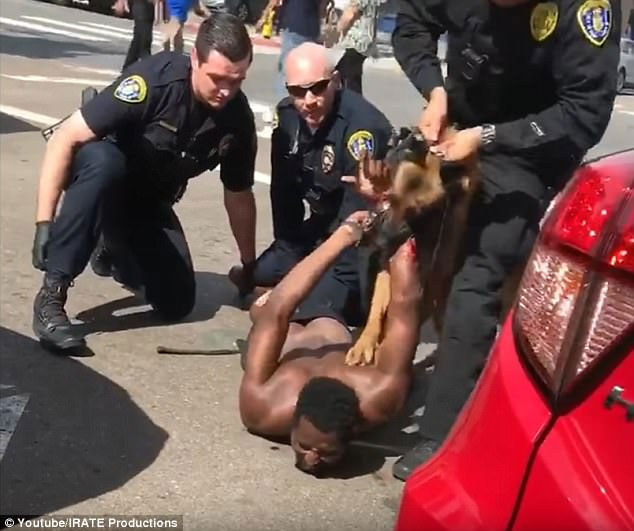 A recent video uploaded to Facebook has once again shown excessive use of force by police. This time, however, it was a police dog that was caught on video violently assaulting a handcuffed and compliant suspect. Three officers also become involved and issued no verbal commands whatsoever and allowed the dog to rip into the man’s flesh and leave a gaping hole. People gathered around the scene admonished the officers to control their animal and tell it to stop biting the suspect. That is when an officer tells a person to shut up and step back.

The incident occurred in San Diego, California, and was captured by a man identified as Angel Nunez and uploaded to Facebook. So far, the video has been shared by millions of social media users. At this time the name of the suspect, the three officers, and the police K-9 have not been identified. Many commentators noted that it reminded them of footage from the civil rights era when dogs were used to attack unarmed Blacks. There has been no comment from the San Diego Police Department so far about the incident. A police K-9 is considered a police officer. In many states, any person killing a police K-9 can be charged with murdering a police officer.

Rolling out contacted Officer Joshua Hodge with the San Diego Police, Community Relations Department. Hodge informed us that at this time a press release has not been issued. Unfortunately, we can release no further information.

The following videos show the initial encounter and the subsequent mauling of the suspect. Warning, the video is bloody and graphic.