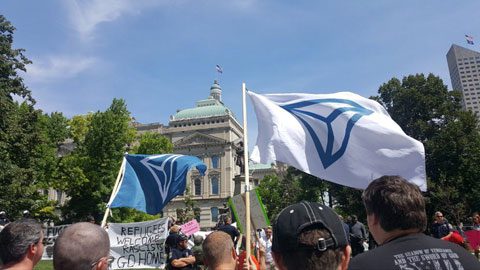 The recent White hate group fueled rhetoric has shown the faces of the new racists. These young White men no longer wear hoods and sheets to hide from the public. Instead, they proudly expose their face and wear everyday clothing and symbols that reveal their racist beliefs. The Southern Poverty Law Center (SPLC) estimates that there are over 900 organized active hate groups are operating in the United States.

One such group is called Identity Evropa, and they wear business attire, khaki pants and polo shirts with a pyramid symbol. This group has been seen recruiting across college campuses and members are considered radicalized with hate. The group is identified as a racist organization by the Anti-Defamation League and the state of New Jersey’s Office of Homeland Security and Preparedness and is designated by the Southern Poverty Law Center as a hate group.

According to the SPLC, Identity Evropa is “Based on the model of European Identitarian groups. Nathan Benjamin Damigo launched Identity Evropa from his grandparents’ compound in Oakdale, California. Identity Evropa focuses on recruiting college-aged, White students in order to discuss “race realism” and White interests, targeting disaffected young men by branding itself as a fraternity and social club.”

The group was founded in 2016 and distributes White pride posters and pamphlets and boasts hundreds of young members who subscribe to the concept of White elitism. The racist slogan “You will not replace us” originates from the group, according to the Anti-Defamation League.