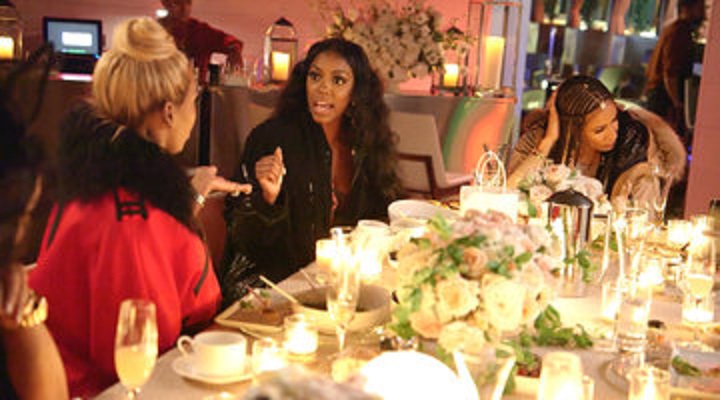 The flames of resentment and hurt burn within the soul of “Real Housewives of Atlanta” star and singer Kandi Burruss. She is still rebounding emotionally from the malicious lies that former “RHOA” cast member Phaedra Parks spread about her — regarding wanting to rape a cast mate in her sex dungeon — and that Porsha Williams too eagerly helped spread.

The topic came up after Sunday evening’s explosive episode where Leakes and Williams got into a vicious verbal altercation in San Francisco and the subject of the sex dungeon came up again.

Williams, who’s in an anger management class, said Leakes needs to join a program as well.

Things got especially heated however when Williams once again alleged that Leakes tried to get her and Parks fired for spreading the sex dungeon lies about Burruss.

“I never called and tried to get you motherf—ing fired!” shouted NeNe. “Nobody had your back but me, b—-!”

She added this, however, “You deserve some discipline for what you did to Kandi!”

On Sunday after the episode aired, Burruss reacted to a fan on Instagram who defended her decision to continue to hold a grudge toward Porsha. According to Kandi and the fan, there’s no set timeline for forgiveness.

“For those who watch #RHOA & say I should just get over the false accusations that Porsha said about me last year need to leave me alone,” Burruss wrote.

“You can’t just falsely accuse someone of trying to drug you & take advantage of you on camera with the intent of defaming them & think it’s just gonna be ok a month later,” Burruss added.

Kandi also added that if the allegations were true, she’d be part of the list of sexual predators being exposed in Hollywood. Despite that, she’s continuously trolled by “#KandiAKABillCosby” comments.

“This is my REAL life not my REEL life, like @grammarci said,” wrote Kandi. “If the truth wouldn’t have came [sic] out some of y’all would’ve been putting me in the box with some of those predators that are being put on blast right now. All because her a– was spreading lies about me on national tv. So stop putting a timeline on when I’m suppose [sic] to forgive & forget.”