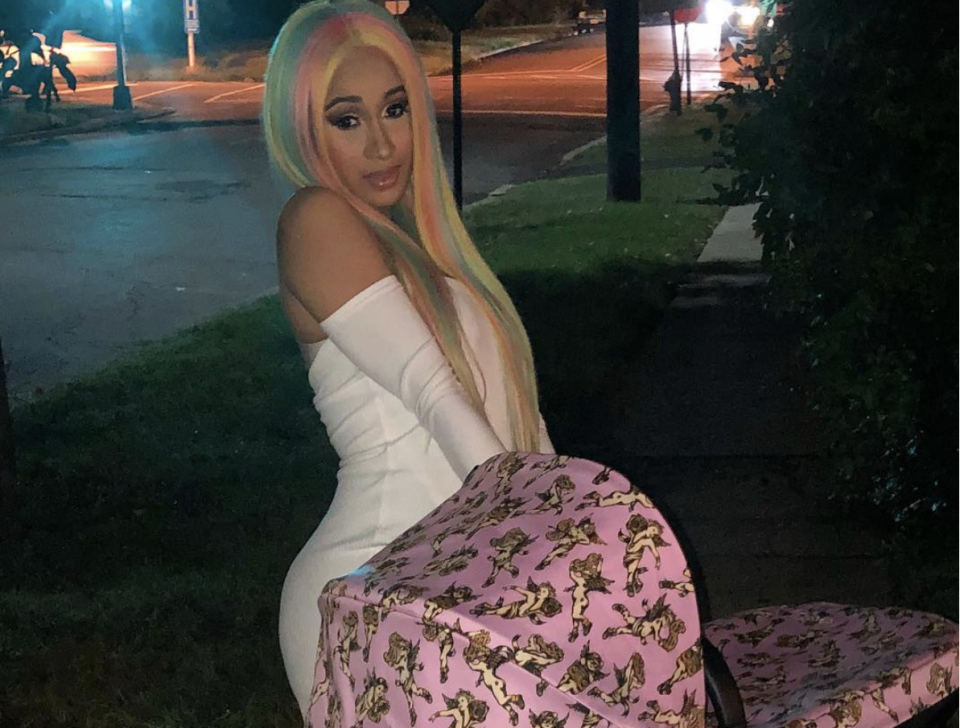 The “Bodack Yellow” rapper has been working on shedding the pounds she put on when she was carrying her daughter Kulture Kiari, whom she has with her husband Offset, since the tot’s birth in July, but she has now claimed she thinks she might have gone too far with her weight loss.
Cardi B wants to “gain back” some of her baby weight.
Posting a picture of herself on Instagram, she wrote: “Now that I lost all the baby weight I gotta gain some back. Skinnymomma @teamiblends getting me snatched (sic)”
The post comes after Cardi, 25, previously claimed she was considering liposuction to remove her fat because she doesn’t like working out.
She said: “I still got, like, a lot of love handles right here. They’re not much, but it’s, like, you know, I’m used to having, like, a real tight stomach. So this extra skin is like, ‘Where the f –k did you came from?!’
“But it’s like I might just get a little lipo. Because I mean, I feel like I can work out and my stomach will be back how it used to be. But I really don’t have time to work out. I never been the type to work out. I never stepped a foot in the gym.”
The “I Like That” songstress has been open about her body struggles in the past and also revealed she wanted a “titty renovation,” after being left shocked by how low her breasts have dropped since giving birth.
She said: “Oh this sh-t is crazy, I have never done this sh-t in my life before. I have to f—-ing tape my titties up because giving birth and sh-t.
“My titties were already a little low low because I got my tits done when I was 19 and I never wore a bra and sh-t. But when I was pregnant my sh-t was nice though. Now though, Kulture did me filthy!
“I don’t give a f–k, if you motherf—–s see me gone in November/December I’m getting my tits done, I don’t give a f–k.
“Matter of fact, I’m not even going to call it surgery, I’m just going to call it a titty renovation because I’ve got to renovate these. Sh-t is f–ked up, I’m out here taping myself so my tits can be [cluck cluck cluck noise]. I want my sh-ts to be like this again, sh-t is not looking beaut but I don’t give a f–k.”