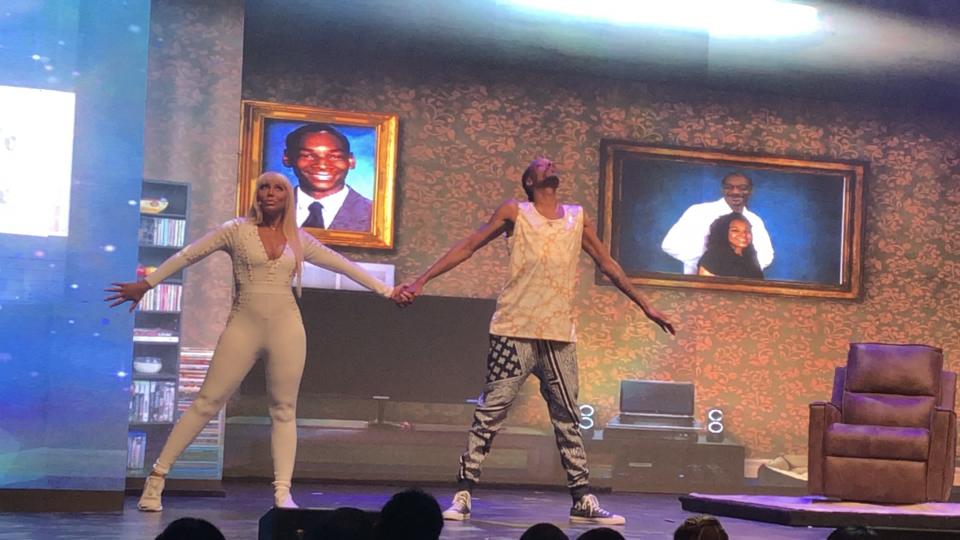 Je’Caryous Johnson’s newest stage play, Redemption of a Dogg, stars music icon Snoop Dogg and singer Tamar Braxton. The play chronicles a character built around the persona of Snoop Dogg, a multi-faceted character who’s a gangsta rapper, family man and man of God. It examines the internal battle one man has between preserving his life-long legacy and losing the love of his life.

The play also stars Tamar Braxton in a role that we’ve never seen her play before. As the character The Angel, Braxton guides Snoop along his life’s journey and serves him with witty “what-you-need-to-do” moments when he’s faced with choosing fame and fortune over faith and family.

Rolling out recently talked one-on-one with Braxton about her role in the play. Check out what she had to say below.

Tell us about your character in the stage play Redemption of a Dogg.

I am an angel. Everybody thinks that I’m Shani [Snoop’s wife]. Not. I’m not Boss Lady at all. But my character is really important to Snoop because I have been assigned to him to guide him to his destiny.

Tell us about one of  your favorite scenes in the play.

I think my number one favorite scene is when I have a conversation with Snoop about taking accountability for all of the mistakes that he’s made, and really getting him to look at himself and not blame others for what happened. Now, others did do things wrong; however, you have to take accountability for your part.

How easy or difficult was it for you to play the role of an angel?

At first, I was very apprehensive about playing the role of an angel, because I didn’t know what she entailed.

Understandable, because we see you as bad girl, tough chic, sassy mamma, and all of that.

And I am all of that in this play. And I’ve said this before, I feel as if God places our angels around us who can identify with us. This is who I am in the play to Snoop. Because he’s tough, he’s got sass to him, he’s funny, he’s also smart, and he’s also talented. We’re like parallel to each other in this play.

How do you navigate being the unapologetic version of Tamar Braxton, and still manage to live your best life?

I think that I’m unapologetic to who I am, not what I do. So, that’s how I’m able to live my best life because If I hurt your feelings, if I said something that was wrong, I have no problems saying ‘I’m so sorry,’ because my intent is not to hurt your feelings. As a matter of fact, I wouldn’t have a good day if I knew that I hurt somebody’s feelings. I’m able to live my life unapologetically, simply because I’ve accepted myself for who I am, flaws and all. I know that I do have a mouth, and sometimes I want to take things back that I said. And even when I’ve thought about some things, they still came out the wrong way. It’s a flaw. The only thing I can do about that is apologize and really be sincerely sorry and move on.