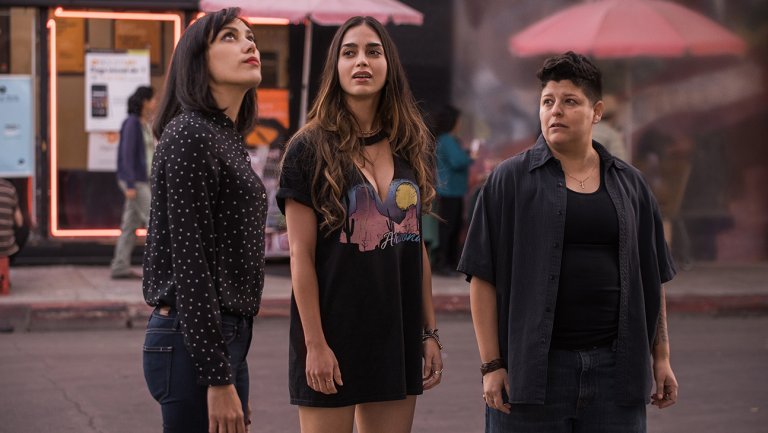 The Tanya Saracho-created series follows the Hernandez sisters, Emma (Mishel Prada) and Lyn (Melissa Barrera), two young adults who grapple with the fallout from a family tragedy — pushing them to move back to Boyle Heights, the historically Mexican American neighborhood in Los Angeles where they grew up. The Hernandez sisters wrestle with childhood traumas and hard truths while exploring sexual orientation, gentrification, grief, loss, complicated relationships and the mismanagement of the family business.

“This is a story about two American girls — they’re Mexican Americans; we can’t forget they’re second, third generation,” Saracho said. “One might be acculturated, one might be assimilated, but they’re Americans.”

“Vida” boasts a completely Latinx and brown crew but the comedy’s undeniable charm and universal themes are easily and hilariously relatable to all. This crossover appeal was demonstrated at “VIDA Sip & Paint” where attendees celebrated the series and culture with tamales, tequila, photo booths, music and more. At the epicenter of the event, there was an art exhibition featuring LA’s most esteemed Latinx artists. Latinx DJ group Chulita Vinyl Club provided a musical backdrop for the evening that highlighted cross-generational Latinx music including exclusive tracks from the new season’s soundtrack. In addition to the art exhibit, guests contributed to a “Vida” themed masterpiece or played “Vida Loteria.”

“We have been playing Loteria for over an hour! Being a Latina, you grow up playing Loteria at every family function but at this event, it’s not just Latinos here. People are playing for the first time and are getting really into the game so it’s cool to share our culture with other people,” Krystal Bee of 97.1 AMP Radio said. Krystal hosted the event and is a native of the Boyle Heights neighborhood.

“I think [this show] is extremely important because there aren’t shows like this that bring light to people like me, people with my background [that are] not mainstream. ‘Vida’ is showcasing Latinos and showcasing people from not the best neighborhoods who are making it work and killing it and they’re Latina,” Bee said.

All new 10 half-hour episodes of “Vida” will be available beginning on Thursday, May 23, on the Starz app and Starz On-Demand in the U.S. and Canada, and on Starzplay in the UK, Germany and Spain. “Vida” airs weekly on Starz beginning Sunday, May 26, at 9 PM ET/PT.