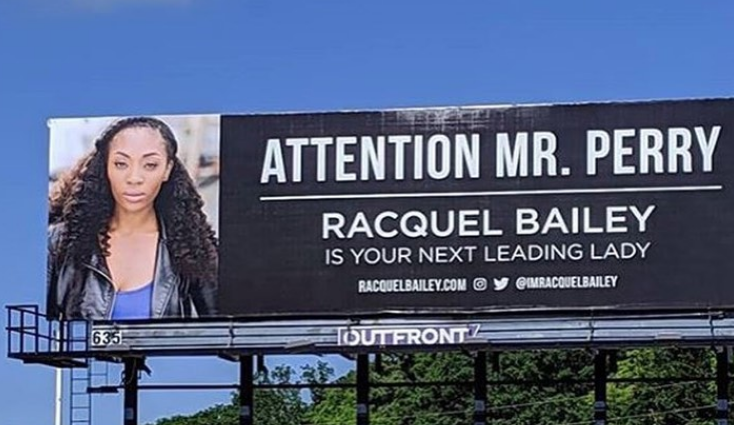 Movie mogul Tyler Perry has a stern message for the throngs of aspiring actors looking for that coveted breakthrough role at his studio: Do not spend thousands of dollars on billboards near his studio asking for an acting role. It won’t work.

In fact, Perry calls the act of people “shooting their shot” by posting billboards a complete turnoff.

Actress Racquel Bailey paid thousands of dollars to put up a billboard in Atlanta declaring that she is Perry’s next leading lady. She included her website domain and twitter handle for the movie mogul to reach out to her.

Perry delivered what some say was a parental-style lecture to Bailey and others who have tried the tactic as the wrong way to go about it. He reiterated that auditioning for his TV shows, movies and plays are all free and that spending thousands on promotional expenses are a waste of time and could be used elsewhere.

The public was split on how Perry addressed this particular woman’s billboard. First, read Perry’s lengthy message to the woman below:

Auhhh…. soooooo…… here’s the deal. This is not the way to get my attention if you’re looking for a role in one of my shows. Please DON’T DO THIS, SAVE YOUR MONEY!! This is the third time that someone has done this. PLEASE STOP! To audition is FREE!! I’m sure you can use that money for a better purpose. I love that you want to work with me, and I love that you invest in yourself. But when you do things like this it puts my team on high alert and makes me look at you sideways. I know the message that you want to send is a positive one, but this comes across as the opposite. Again, the best way to work for me is to AUDITION and it’s FREE! We post breakdowns all the time for actors. JUST COME AND AUDITION. And by the way, you were great in THE NIGHT OF! It was my favorite show a couple years ago. I ALREADY SAW YOU!! So just audition and keep your money!! Again, I appreciate your effort, but that’s not the way to work for me. God bless you dreamer. I have no doubt you will make it one day!!

Some fans understood where Perry was coming from, while many others took umbrage that Perry “humiliated” the woman in order to make a point. Some felt that Perry could have jotted down the actress’ email and/or Twitter handle and communicated with her privately about the proper protocol for getting his attention.

Check out some of the strong reactions to Perry’s Instagram post below, including several from fellow celebrities:

Comedic actor Marlon Wayans wrote underneath the post as if he had his mouth ajar: “Damn. You gave her that daddy speech. “Hey hey don’t do that”!!! 😂 i agree. Spend your money on head shots, acting classes, resumes, sending pics out to agents etc…. audition is free and most effective. Promotion is not skill. Skill is what counts once u get the opportunity.”

Erica Campbell of the Gospel group Mary Mary also squinted but praised Perry nevertheless: “What a wonderful way to teach a lesson with Love! It is a read tho🤷🏽‍♀️ a very nice one😊.”

One fan, @tori4321, thought that Perry’s response to the woman’s billboard pitch was foul and “rude,” saying: “I’m sorry, but I like her drive and willingness to go above and beyond. It’s creative. Girl I hope someone else picks you up other than Tyler Perry. This whole caption was rude and weird. Smh. Ugh.”

@bootsyjones concurred saying he had “Mixed feelings on this … I 100 percent understand your position on this issue however I’m not sure this is the forum to address the actress. It’s kind of embarrassing. You of all people know that creatives most times take a lot of risks and use their last for opportunities to pursue their dreams.

babyblewbubbles added: “Disappointed you didn’t reach out to her personally to tell her this instead of humiliating her😢.”