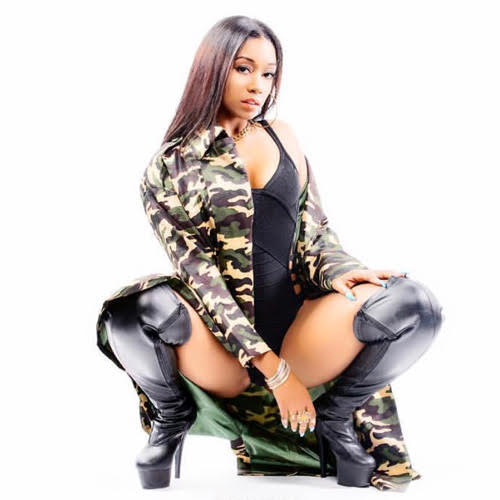 Born and raised in Alexandria, Virginia, up-and-coming female hip-hop artist Kiara Simone showcases her unique style and flow to solidify her position in the new wave of rap music. Kickstarting her career by interning at a local recording studio, the driven MC was able to form significant relationships within the industry. Through these connections, Kiara Simone crossed paths with some of the hottest hitmakers such as 808 Mafia, Dem Jointz, and Zaytoven who produced her hit single, “Mo Money.”

The small-town girl who is now living out her dreams recently sat down with rolling out to share how she got into rapping, life on tour and her new single.

How did you first get into rapping?
I started out as a competitive hip-hop dancer. I trained in hip-hop and then when I was 14, I was rapping a Lil’ Mama verse and I saved it as my voicemail. My older sister was like, “Oh my God, your delivery is so dope.”  From then on, I started writing all my raps. Then she passed away when I was seventeen. She was shot and killed so she is the reason why I started rapping, she was like my biggest fan.

The sacrifice I had to make because I left my Mom with four kids. I left home and came to Los Angles to achieve my dream for my family, so we don’t have to struggle. It’s times where I’m ready to go home but I can’t, there’s nothing for me there. Now all the hard work is starting to pay off.

The beat has to come to me! I can’t force anything on the beat that doesn’t speak to me. It doesn’t take me long at all to write a song. I write fast, I’ve written songs in 10 minutes. Most of the time I have songs already written, and I record them. Then if have time, I’ll freestyle and punch-in other songs.

Those are my babies! They range from junior high school all the way up to college. It’s a lot of us we all Pretty Girl Gang.  We cute or whateva.

Who are some artists you would like to work with in the future?

Drake! That’s my first choice. Also Post Malone, I think he’s pretty dope. It’s so many, to be honest, I would even crossover to the pop world and work with Justin Bieber and Ke$ha. I want to work with everybody. Beyoncé would be dope as well being that Nicki Minaj is the only female rapper that has worked with her.

What is a piece of advice for younger girls who aim to follow in your footsteps in becoming an artist or entertainer? I would say just block everything out and stay focused.