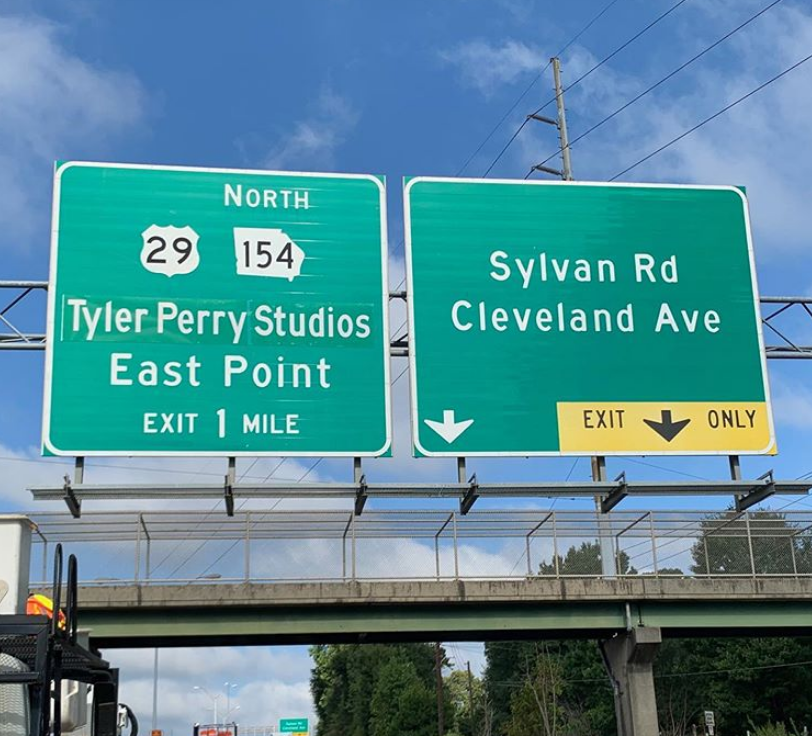 The founder, owner and CEO of Tyler Perry Studios told his four million Instagram followers that tears began to build in his eyes when he drove into work, as usual, but came across this sign emblazoned with the name of his studios. As you can see, the words “Tyler Perry Studios” had just been added to the highway sign.

Perry, 49, said he immediately gave thanks to God for blessing him and directing his path towards his current reality. He is, of course, a major motion picture maker, which is a stark contrast from his dark days of homelessness, starvation and near-destitution as he pursued his dreams.

In particular, Perry shared the particular passage in the Bible that buoyed him while he was living in the streets and then catapulted him towards legendary status.

“I want to share a scripture [or] prayer that helped me keep going, from St. Mark 9:23-25,” Perry said within the long IG post. “It’s a simple prayer by a man who had faith, a man who believed, but still had doubts. He said, ‘Lord, I believe but help my unbelief.'”

That scripture, and his belief in it, had to have helped knowing all that has transpired in Perry’s life in the past two decades, including at least 49 movies and TV shows, according to IMDb.com., not to mention all of the theater plays – which served the Perry empire in its infancy on the way to Hollywood hitmaker.

Driving into work today I saw these signs on the highways being changed. My eyes filled with water knowing what God has allowed to happen in my life. Atlanta has truly been the promised land for me. I came here with nothing, lived off Sylvan Road, ended up homeless and starving, but I was always praying and believing. I was always keeping the faith, knowing that if I worked hard, did my absolute best, kept my integrity, honored every blessing, and remained grateful through it all that everything would work out. And it has, thank God. But to all of you looking at my life now, I want to share a scripture/prayer that helped me keep going from St. Mark 9:23-25. It's a simple prayer by a man who had faith, a man who believed, but still had doubts. He said, "LORD I believe but help my unbelief." Even in my darkest times when I wanted to give up, I kept believing, and I asked God to help me to believe past any naysayer, any doubt, and any problem. Just know that it is possible to believe in your dream and still wonder how or when it’s going to happen. Stay the course. Pray, work, believe and repeat. You’ll get there. Just believe for as much as you can, and ask God to help you believe for the rest!