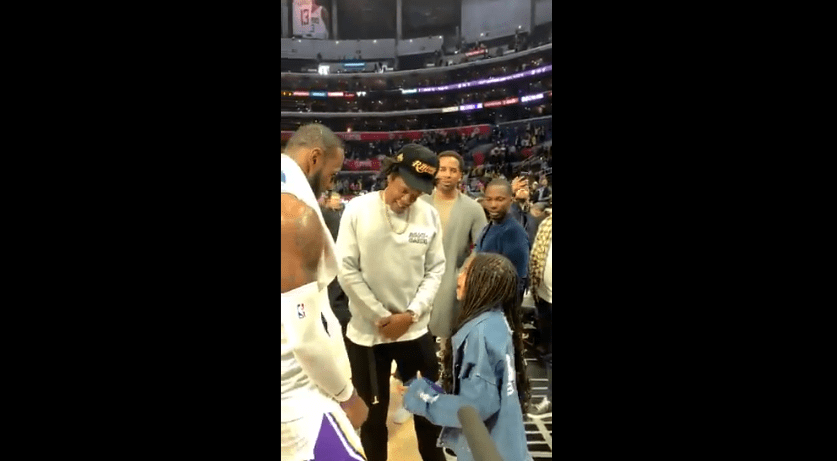 It’s not often that an icon gets starstruck by another celebrity, but Blue Ivy Carter was adorably shy when she met NBA superstar LeBron James for the first time.

The 8-year-old daughter of pop goddess Beyoncé was taken by her father, Jay-Z, to attend the much-ballyhooed and celebrity-drenched Los Angeles Lakers game against its in-city rival, Los Angeles Clippers on Sunday, March 8, 2020. On International Women’s Day, Jay took his burgeoning star Blue to the game while presumably giving wife, Queen Bey, a reprieve from mommy duties.

After the Lakers won the marquee matchup, 112-103, King James was in the mood to meet the many celebrities who showed up at the Staples Center, to the delight of Blue Ivy. And it turned out that she had a request of the 35-year-old James.

At first, Blue Ivy melted the hearts of Twitter because she was too shy to ask James for an autographed basketball. She tried to ask her 50-year-old dad to relay the message, but Jay-Z refused to ask for her.

“I can’t do it,” the rapper replied in the video shared by ESPN. “If you want it, you gotta tell him….You almost got it out. Yeah, just do it.”

Blue Ivy, while fumbling with a blue item in her hand, worked up the nerve to ask LBJ for the autographed ball.

He then promised to send it to her “soon.”

Toooo stinkin' cute. Blue Ivy wanted to ask LeBron for a signed basketball. She told her dad to do it for her. He said, no I can't do it, you have to ask. So then she asked him. LeBron told her she would have her signed ball by the time she gets out of school on Monday 🥰 https://t.co/KXKUNOTHUr

Both the legendary b-baller and the legendary music mogul fawned over Blue Ivy. And the meeting might have been best summarized by this tweet:

An icon and two of her fans ☺️
💙💙
💜💛#blueivy #InternationalWomensDay #JayZ #LeBron https://t.co/aZ3VzN7GMV

Here is an even better angle to check out the Blue Ivy and LeBron summit meeting at the Staples Center:

Fans lost it with the Blue Ivy “cuteness quotient.” They can’t seem to get enough of Blue Ivy, who might be the most charismatic person in the Beyonce and Jay-Z household:

Something about the fact that Blue Ivy is mature enough to be sitting court side with her legs crossed is sending me pic.twitter.com/nRjxASQSio