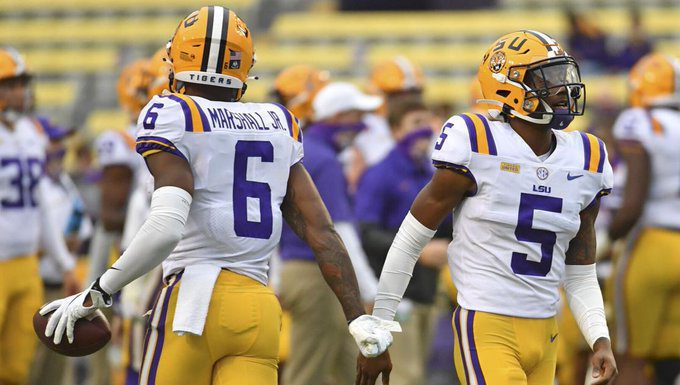 While the world celebrated a foreseeable change for the United States with the projected results of the 2020 presidential election, one LSU football freshman continued to live an ongoing nightmare.

Koy Moore, who plays wide receiver for the team, was cornered and allegedly harassed by officers who assumed he was up to no good.

“Last night I was approached by policeman [sic] they pulled guns on me assuming I had a gun and drugs,” he wrote. “I was violated numerous times even as going as far as trying to unzip my pants in search of a weapon that I repeatedly told them I did not have.”

Moore said he tried to record the harassment on his phone, but it was “snatched” by police.

“I could’ve lost my life and I know for a fact nothing would’ve happened to the guys who did it,” he said.

#LSU and Baton Rouge Police Department officials are both investigating an incident in which wide receiver Koy Moore said he was “violated numerous times” by police officers on Saturday night.https://t.co/VYk97UL2mR

The three officers involved in the incident are currently on paid administrative leave while an investigation ensues, according to Baton Rouge Police Chief Murphy Paul. Both Murphy and administrators from LSU reacted to the incident after Moore posted a lengthy statement about his unfortunate encounter.

“We appreciate Mr. Moore bringing this incident to our attention. As in every case, we will be collecting all available evidence and conducting interviews. Accountability and transparency are critical in building trust with the community. I pledge a thorough investigation into this complaint,” Paul said in an official statement provided by CNN.

View Moore’s account of the incident after the jump.