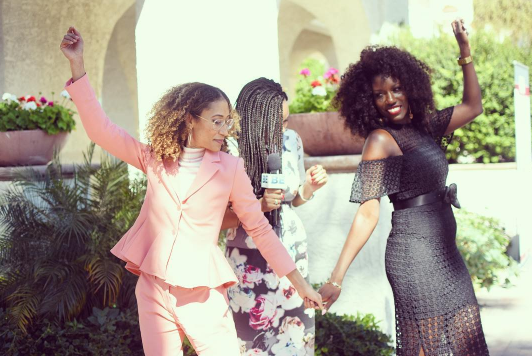 Over the weekend, this writer had the pleasure of attending the Black Enterprise Women of Power Summit in sunny Phoenix. This three-day conference was dedicated to corporate women on the move who are ready to embrace their power, position themselves for greatness and become leaders in their companies.

From candid conversations to powerful panels and an inspiring awards ceremony, there was truly something for everyone. One conversation that completely blew us away featured Bozoma Saint John and Elaine Welteroth. Saint John is a marketing executive at Apple Music and Welteroth is the first African American editor of Teen Vogue.

These two powerhouses were just as beautiful as they were business-minded and they shared so many gems for women who want to win. They are literally #BlackGirlMagic personified.

These were my top five takeaways:

In a colorful story about her move from Ghana to the U.S., Bo outlined the importance of embracing your uniqueness instead of attempting to fit in. Although she did everything she could to “look like them” and “dress like them” she quickly found herself back to her old self and still just as successful. The powerful lesson she learned is that it’s what she has inside of her that is magical, and it has nothing to do with her outward appearance that she was trying so hard to change.

Bring value to the table

Throughout the conversation, we heard the importance of knowing your strengths and capitalizing off of them. Whether you bring experience, education, an idea or your network to the table — as long as you’re offering value, that’s all that matters. You have to have credentials if you want to make connections.

Welteroth mentioned her first few encounters with Bo before she became an editor for Teen Vogue. She shared how open, honest and helpful Bo always was and remembers her offering encouragement from the very beginning. One thing she was sure to mention is that Bo practiced what she preached. She didn’t just claim to “be there” for her, she actually showed up.

Pull up a seat for your sister

Once you’ve made it, it’s time to pull someone else up. Whether you’re mentoring a young sister or providing a listening ear or word of encouragement, there’s always someone who could use your support. Once you’ve broken through those glass ceilings and have a seat at the table, it’s important to pull up a seat for your sister.

Put your money where your mouth is

It’s one thing to express your support with advice and a kind word, but it’s much more meaningful when you put your money where your mouth is. Welteroth shared a story of the time she edited her very first cover including a young Black woman and was met with so much opposition. When Bo learned of the issue, she purchased not one but two ad pages on behalf of Apple Music. Can we say #BlackGirlMagic?!

Don’t just talk about it, be about it. Act on your promises, be a woman of your word, support events, buy products, refer friends, make introductions, share resources and support your sisters in their success.