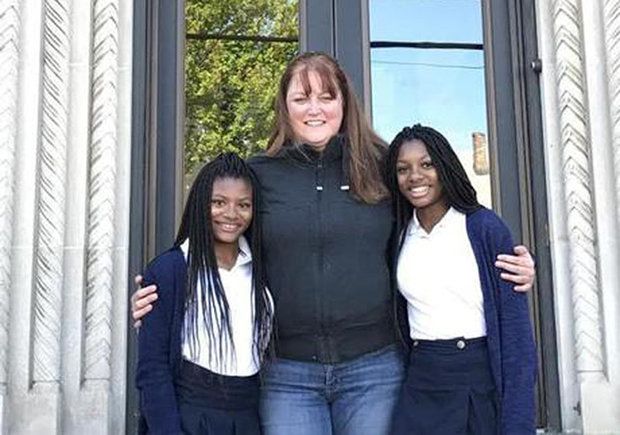 Deanna and May Cook with their mother Colleen. via Family Photo

The discrimination began after twin sisters Deanna and May Cook, 15, decided to wear braids after returning to school from spring break, according to The Boston Globe. When they returned, school administrators told the girls that they would have to remove their hair or face suspension.

The school’s dress code doesn’t allow for students to wear braids or hair extensions. The administrators’ statement  reads, “One important reason for our students’ success is that we purposefully promote equity by focusing on what unites our students and reducing visible gaps between those of different means.”

However, the administrators are contradicting themselves in many ways with that statement. By having a desire to “reduce visible gaps between those of different means,” it forces those with “different means” to conform to a school that has a majority White student body. White students are never in a situation where they have to conform to Black traditions, so why are Black students being forced to conform to White norms when it comes to hair? That goes against the idea of uniting a school.

But the Cook sisters, both honor students, have faced punishment because of their hair. They have been forced to take detention an hour before and after school; they can’t participate in sports, and they won’t be able to attend the school’s prom. Another Black student has been suspended for wearing braids.

The NAACP and Anti-Defamation League have both attempted to meet with the school, but the school’s top administrator, Martin Trice, has not changed his decision.