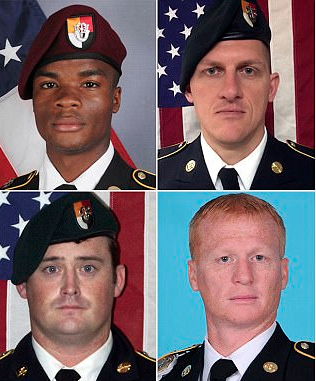 Sgt. La David Johnson was in an armed pick-up truck when he and his comrades were ambushed on Oct. 3 in Tongo Tongo, Niger. He was being trailed by a Land Cruiser carrying Sgt. Bryan C. Black, Staff Sgt. Jeremiah W. Johnson, Sgt. La David Johnson and Staff Sgt. Dustin M. Wright. Their cruiser was hit by a mortar and all three soldiers were killed. Johnson and his vehicle escaped the fire but then he went back. Two other U.S. soldiers in the truck ran to the Land Cruiser to return fire, with Johnson covering them from a mounted machine gun on the pick-up truck. They got back into the vehicles when they realized they were dangerously outnumbered and in the kill zone. Johnson’s body was discovered on Oct. 6.

On Friday, Oct. 27, new details revealed how Johnson actually died. A gang of 50 ISIS militants were hiding behind trees on either side of a road near the remote village when they attacked the U.S. soldiers. A village elder is suspected of stalling the troops before the ambush. He is the same elder who shared the whereabouts of Johnson’s remains to Nigerian forces.

The 42-man unit, less the aforementioned soldiers, were under fire for two hours after their call for backup. French fighter jets essentially saved their lives, the surviving U.S. and Nigerian soldiers in tandem, continuously firing shots until ISIS was scared off.