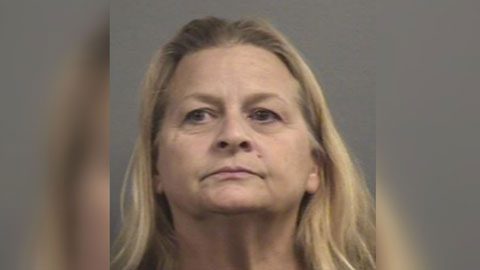 An angry grandmother has been arrested after she tried to slut shame a woman who used to date her adult son. According to Louisville, Kentucky police. Frances Joyce Bailey, 60, illegally entered Pleasure Ridge Park High School. She then went to a girl’s restroom and threw nude pictures of her son’s ex-girlfriend on the floor.

Bailey returned to her car, drove around the parking lot and threw more nude pictures of the woman out of her car window. Local media outlet WAVE3 News reported that Bailey was angry at the woman in the pictures for placing an emergency order of protection against her son. The unidentified woman in the pictures has a son who attends the high school and the photos were an attempt to embarrass the student.

Bailey was caught on school surveillance cameras while she was committing her heinous actions and police were soon able to track her down and arrest her. It turns out she had stolen her son’s cellphone and printed out the pictures of the woman. Because of her actions, Bailey has been charged with distribution of obscene matter, criminal trespassing and harassment.

School officials issued the following statement regarding the incident: “Photos were up for just a few minutes. As soon as students saw them – they took them all down and immediately went to administrators. The incident was caught on videotape and PRP leadership worked with police during the investigation. We have reiterated our school protocols to students and reminded them that they are not to let anyone inside the building.”

Her son, identified as Ronnie Bailey, stated to media, “I hope she didn’t do it. Because that is a sex crime against children and that is really, really bad.”

Ronnie Bailey went on to say he is apologetic to the woman in the photos, and that he still loves her.