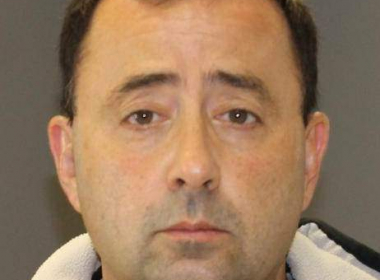 GRAND RAPIDS, Michigan – The Olympic gymnastics physician who is accused of sexually assaulting gold medal winners Gabby Douglas and Aly Raisman — and a score of other female athletes over decades — has been sentenced to 60 years in prison for being caught in possession of tens of thousands of child pornography images.

This is essentially a life sentence for for the former nationally renowned doctor Larry Nassar, 54. And, despite the fact that he is not being imprisoned for assaulting and raping scores of young women, per se, the fact he received the maximum sentence for child pornography possession suggests that he is perhaps paying for those alleged crimes as well.

A federal judge declared Nassar a threat to children Thursday, Dec. 7 in handing down the harsh punishment. Moreover, he is still awaiting sentencing for 10 state counts of first-degree criminal sexual conduct, which he pleaded guilty to in November, ESPN reports.

Several of Nassar’s victims and their families filled the federal courtroom as Judge Janet T. Neff told Nassar that he had violated the most basic principle of medicine: “first do no harm.” She said he used his power to sexually assault scores of young women during a decades-long career as a renowned doctor with USA Gymnastics and at Michigan State University in East Lansing.

“It’s imperative Mr. Nassar be deterred as long as possible,” Neff said before delivering the maximum allowable sentence for his three federal crimes. “Mr. Nassar was, is and, in my view, will continue to be a danger to children. He has demonstrated that he should never again have access to children.”

FBI agents recovered over 37,000 illegal pornographic images that he tried desperately to ditch in a curbside trash bin when they searched Nassar’s Holt, Michigan, home in the fall of 2016. Among the “shockingly large collection” of images, U.S. attorney Sean Lewis stated, reflects a very disturbed man who managed to hide behind his impressive credentials and education. There were images of children who were “very young to teens, children being raped, sexually molested, digitally penetrated.”

Nassar pleaded guilty in July to charges of obtaining and possessing child pornography as well as an additional charge of attempting to destroy evidence. He was first indicted on the child pornography charges last December. Each of the three charges against him come with a maximum penalty of 20 years in prison. Neff ordered him to serve each of those 20-year sentences consecutively, meaning, if he is still alive, Nassar will be 114 years old when the last of them is finished.

The first-degree criminal sexual assault charges still staring at Nassar stem mostly from incidents in which he sexually assaulted young women who came to him for medical care. Many of the 125 women who filed police reports against him in those cases said he used his hands to penetrate them — some when they were younger than 13 years old — and claimed it was part of a medical procedure. He admitted in court last month that what he was doing was not a legitimate medical procedure.

The FBI also said it found videos that they believe showed Nassar sexually assaulting children in a pool. Special agent Rod Charles testified last December that the garbage pickup crew was behind schedule on the day of the FBI’s search, which gave officers time to check his trash bin.

“He abused my trust, abused my body and left scars on my psyche that may never heal,” Maroney told the court in her letter. “Larry Nassar deserves to spend the rest of his life in prison.”

Among the women to file complaints against Nassar was U.S. Olympic gymnast Aly Raisman. Gabrielle Douglas spoke out about her harrowing experiences with Nassar last month.

In all, more than 140 women have filed lawsuits against Nassar, USA Gymnastics, Michigan State and high-ranking officials from both institutions.