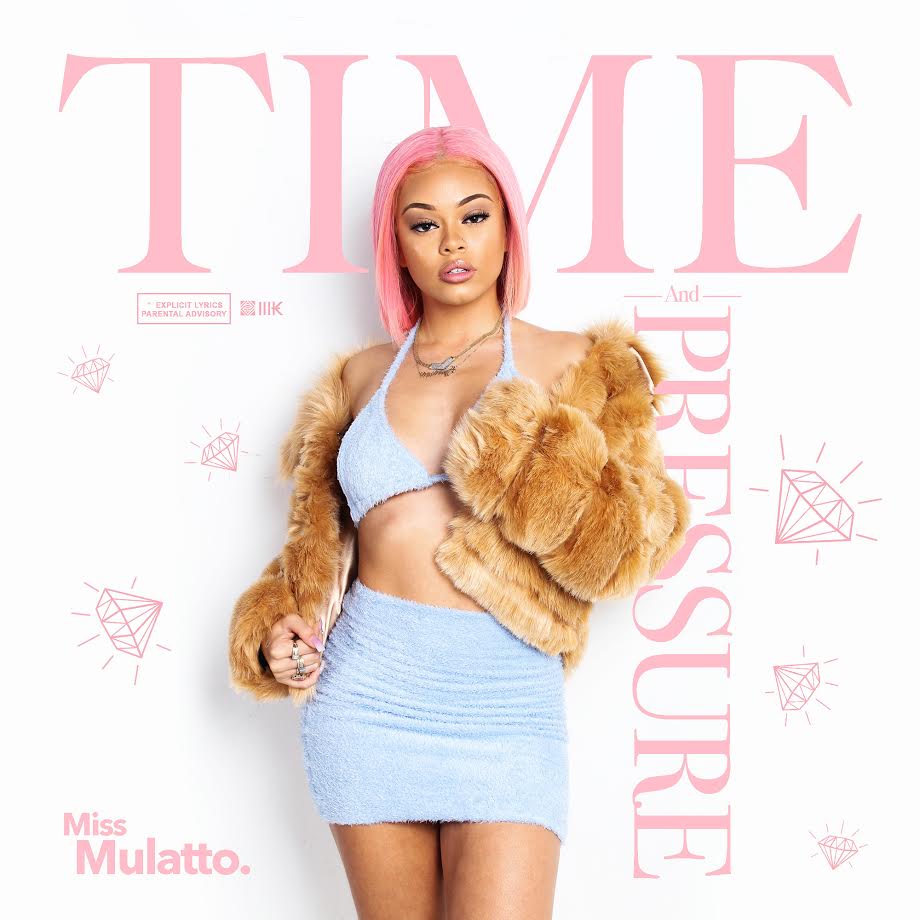 The moment I walked into Miss Mulatto’s studio listening session, I knew I was about to witness an artist in her prime.

She was in her element: an enhanced version of the superstar birthed from Jermaine Dupri’s “The Rap Game,” yet a matured model of the same girl I was first introduced to nearly five years ago. Short, sweet and sassy (much like herself), the new EP is stacked with six songs that showcase Mulatto’s range as an artist, particularly a female lyricist. Before previewing songs from her then forthcoming Time and Pressure EP, the young rap star launched a broadcast from the intimate, yet public listening session to give her dedicated fanbase a preview of what’s to come.

With her birthday marking today’s EP’s launch, the rapper is not only celebrating a new year, but also a new life chapter. We caught up after the listening session to discuss being young in an adult industry, her growth as an artist the past half-decade, and what life has been like since winning Season 1 of “The Rap Game.”

You’re getting ready to release a brand new EP. What have these past few weeks been like?

Crazy! I’ve been in and out the studio, making preparations and putting the finishing touches on everything.

Let’s talk about your age for a second. You’ll be turning 19 on the EP’s drop date, correct?

Yes! I decided to drop the project on my birthday for a few reasons. People normally get the most [social media] love on their birthdays and it’s been about six months or so since I dropped a project, so I figured it would be a perfect time.

What’s it like being an artist who’s right on the border of child and adulthood?

I would say it’s pretty difficult, especially having your dad as your manager. Defining that line is pretty tough, but it’s pretty fun as well, because everything is on edge. Like, ‘Is this age appropriate,’ or ‘Should we take this route yet?’ But you know, its fun being young in an adult industry!

How do you think that’s effected you as a lyricist?

I write everything myself, so since I am young, I rap from a young perspective. It’s not difficult in the sense of trying to figure out what to say … that’s easy because I write everything on my own, so whatever I’m talking about is always told from a real 19-year-old perspective (not by two grown men ghostwriting, if you know what I’m saying).

What’s life been like since winning Season 1 of Lifetime’s The Rap Game? How do you think the show’s platform helped you?

Social media went up. Views went up. Everything went up! Bigger people want to work with you, bigger deals on the table.. Being on TV with millions of people watching was everything and I’m definitely appreciative of the opportunity.

Let’s talk growth, because that’s a recurring theme here! You & I first met on the set of your “Crush” video back in 2013. What do you think has changed most about you since then?

So back to your new EP. I was able to hear the whole project at your listening party and it seems like you’re trying to send a message about the new you. What do you want this body of work to say about your current standing as an artist?

Yes, exactly. The Time & Pressure EP is essential to letting people know that I’m not the same girl from the rap game, which was 3 years ago now — Wow!

Yeah, we started filming when I was 16! It seems crazy now. [laughs] But I’m letting people know I’m not that same girl. As an artist I’ve grown all around. Everyday is a level up for me and I’m excited to show that through my project.

As soon as I heard the title, I knew Time and Pressure was a play on cultivating Diamonds. Tell me a bit about how you made that connection.

I definitely feel like I’m underrated, being young in an adult industry and female in a male industry. Sometimes it gets rough. Sometimes you feel like all odds are against you. I see myself as a diamond in the rough, and like you said, the recipe for Diamonds is Time and Pressure! It’s about showing people that growth.

I noticed you chose to do more of an intimate listening session, versus a big party. What led you to that decision?

Everything about me is very close knit; even as a person and aside from my career. Like, my dad manages me. My mom handles all my finances. I like to keep genuine people around me instead of a room full of randoms. Everyone I had in the studio that night were people I felt would give their honest opinion. I just don’t want a bunch of Yes-Men around me.

I totally feel that. Which song is your favorite from Time and Pressure?

Aw, man! It’s hard to give a solid favorite. As artists, I feel like when we first record a song, we’re like “Ahhh I love this song, its my favorite!” But, the next day you’ll probably feel the same way about a new song.

Gotcha. So which song would you say falls best in line with the message you’re trying to send?

Definitely track number 1, “Facts.” I used that as the intro on purpose actually, since It’s a freestyle of straight facts about life. Most of everything I’m spittin’ on Time and Pressure are things I’ve been through.

What has working in the music industry taught you, and how do you think it’ll effect your career moving forward?

I keep going back to this “being young in the industry” thing, because it really gets tough at times. You’re forced to act like an adult while you’re still young, you know.. You may not take things as seriously as others. I’ll be honest, I like to have fun and sometimes I need someone to remind me it’s grind time. Being my age in my position definitely gets tough at times, but it’s taught me to take things more seriously. There is no playtime in this industry, you either get it now or miss out on an opportunity that’s not going to come again.