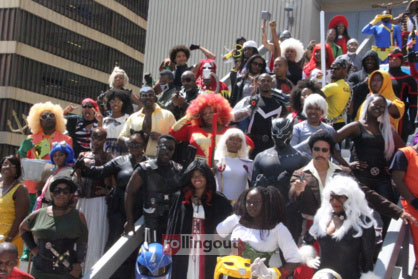 Black Cosplayers the “Bleeks and Blerds” of DragonCon 2017 in Atlanta, GA (Photo by Mo Barnes for Steed Media Service)

For many decades, when it came to the science fiction and fantasy genres, Blacks were sadly missing or present only in the background. For many, the presence wasn’t solidified until the premiere of the hit TV show “Star Trek” in 1966 that America saw Nichelle Nichols portray Lt. Uhura that showed Black people somehow survived into the future. Now some 52 years later Black folk have not only survived into the future but we also have superpowers and advanced civilizations. Not only are Blacks present, but we have even defined our space in fan culture. Instead of being called a geek or a nerd, Black hardcore pop culture fans prefer bleek and blerd. These are the people you see at conventions like DragonCon where fans come from across the nation for four days of pop culture fun that includes cosplay. In 2017, DragonCon saw several hundred Black attendees participating in cosplay with the theme “Black Heroes Matter” and attendees went all out. 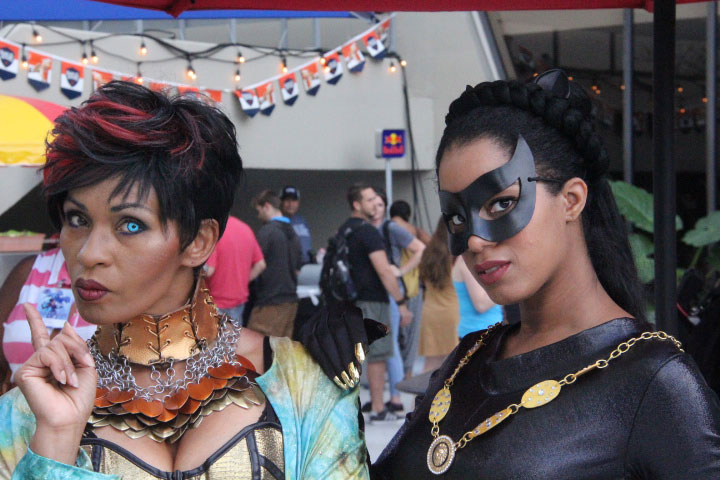 Black Cosplayers the “Bleeks and Blerds” of DragonCon 2017 in Atlanta, GA (Photo by Mo Barnes for Steed Media Service)

In science fiction, we saw a Black action hero leave the gritty streets of urban America and be the ruler of Cloud City with the character of Lando Calrissian portrayed by Billy Dee Williams. Since then we have enjoyed Wesley Snipes as Blade, Samuel Jackson as Mace Windu, and John Boyega as Finn in Star Wars, Mike Colter as Luke Cage and now we await Chadwick Boseman to reprise his role as Black Panther in a full-length film on Feb. 16, 2018.

Black Panther promises for many to be a defining moment in Black pop culture as a powerful storyline and engaging characters have already seen advanced ticket sales result in sold-out screenings across the country. The story of Black Panther and the technologically advanced fictional kingdom of Wakanda has stirred the imaginations of many. For some, it is a fantasy of Africa unconquered and a people always free. This is not lost among many racist White fans of comic book culture who have taken to social media to show their hate. The debate is being played out on Twitter:

Just in case I hear some stupid, ignorant, racist comments in the theater when I sit and watch this movie. Just Kno I’m ready.#BlackPanther#BlackPantherSoLit pic.twitter.com/xAEOe9tyFm

The Black superhero is here to stay and the comic book culture has changed forever.