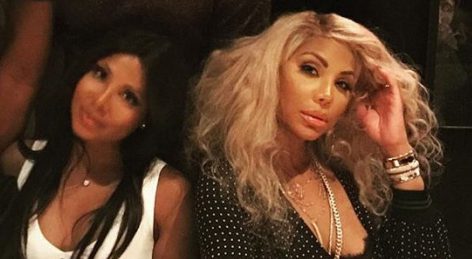 The two most famous Braxtons, Toni and Tamar. [email protected]

The hit reality show “Braxton Family Values” catapulted Toni Braxton’s sisters and mother to the forefront of the pop culture mainstream while reintroducing them to loyal urban fans. It has provided the family a vast platform to further their musical pursuits and helped expedite their entrepreneurial dreams.

But that notoriety and brand enhancement has come with an exacting price.

As far as most of the Braxton women are concerned, that price has become too steep to pay, which is why the clan of singers and the matriarch walked off the set of the WEtv show this past season.

The Maryland-born entertainment sisters, the offspring of an opera-singing mother, have informed WEtv and Magical Elves Production Company that there is a line that they refuse to cross anymore.

Toni, 50, Trina, 43, Towanda, 44, Tamar, 41, Traci, 46, and their mother Evelyn, 70, did not record the second half of season six until they renegotiated their contracts. As a matter of fact, the six of them walked out on an episode being taped in Atlanta this past June.

Tamar Braxton, the breakout star of the reality show and the singer of hit songs “Let Me Know” and “Stay and Fight,” said the two entities are manufacturing needless drama in order to sustain and spike ratings.

“We STARTED having major OVER THE TOP family issues because some network wanted to compete with old love and hip hop numbers,” Tamar Braxton said on Instagram. “And felt that our family was to ‘perfect’ and un relatable ? ( Thats another story)…But only to realize that our problems are JUST like everyone else’s.. AND this BLACK FAMILY IS FINE THE WAY WE ARE!!!!”

When the second half of the season premiered this past week on WeTv, Braxton family members, who sometimes squabble among each other, became a monolithic group and refused to promote it or talk about the show with their large fan bases on social media.

Can this be the beginning of the end of the popular show? If so, would you miss it when and if it goes off the air?

Watch the trailer for the return of season six of “Braxton Family Values”: