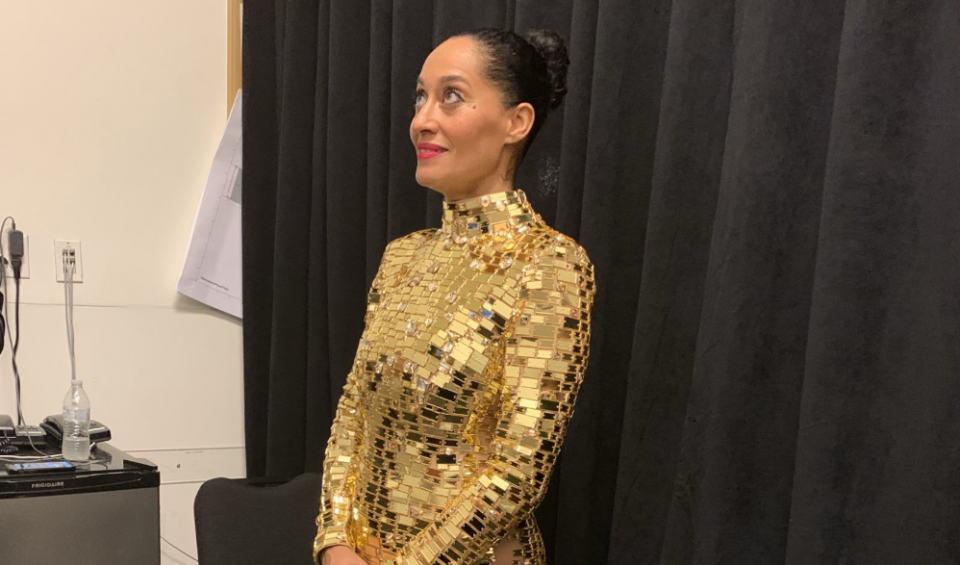 When it comes to style, Tracee Ellis Ross is fly and fearless. It was no different when it came to the American Music Awards. The “Blackish” star hosted the big night in music for the second year in a row, and she did it in grand style.

Before the evening kicked off, Ross shared this tweet: “I’ve featured black designers in all of my @AMAs press looks, and will do the same for all my show looks tonight! Stay tuned for look-by-look details!”

The actress had 10 fabulous outfit changes during the evening. She used the opportunity to showcase Black designers in each of her ensembles. Below is a breakdown of each of her 10 looks from the American Music Awards.

Look 2: The second outfit of the night came as Ross opened the show with a high-energy dance routine. She wore a cape created by fashion icon Dapper Dan.

Look 4: The actress used her platform at the awards show to encourage people to vote, sporting a white T-shirt with “I am a voter” written in black letters across the front and a beautiful long red skirt by Shanel Campbell.

Look 6: She stopped the show when she came out in a sexy leopard print suit designed by Luxury Women’s ready-to-wear label Sergio Hudson. This outfit was the definition of fabulous.

Look 7: This is one of my favorite looks of the night. The host danced it out to Ciara’s “Level Up” in her colorful African-inspired dress by Claude Kamen of LavieByCk.

Look 9: She made a statement in blue in her Dèshon suit, earrings and broch.

Look 10: She closed the evening in an off-the-shoulder CUSHNIE pantsuit.