One of the biggest criticisms of the “Surviving R. Kelly” documentary was its inclusion of radio personality, Charlamagne Tha God, who in his past has also been accused of sexual assault. To complicate matters even further, old tweets recently resurfaced in which “The Breakfast Club” host appears to be supporting R. Kelly and his sex tape with a minor.

“R Kelly had the best celebrity sex tape of all time,” Charlamagne tweeted in 2010, along with a series of other dubious and disturbing tweets addressing Kelly’s predilection for underage girls. 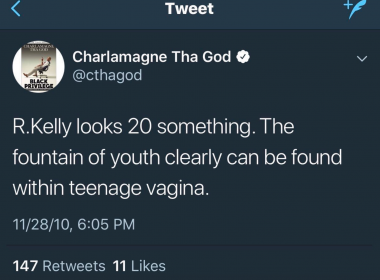 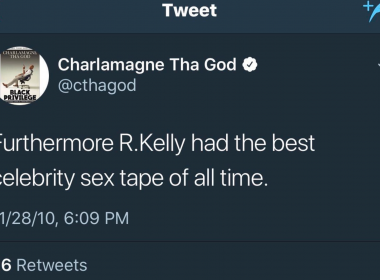 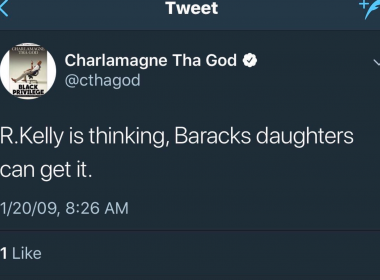 When asked why she would include someone with Charlemagne’s past in the documentary, executive producer dream hampton expressed regret.

“The most important criticism I’ve gotten is having Charlamagne, who is a radio personality in New York City, on to talk about R. Kelly when he himself was accused about 10, 15 years ago of sexual assault. So, that criticism is one that I have to look at,” said hampton on the radio show “The Takeaway.”

“We definitely limited the amount of time that he got,” hampton added. “He was so clear and so forceful in his condemnation of R. Kelly. If I could have interviewed him after the story broke about his sexual assault allegations in his own past, I would have asked him to reckon with his own past on camera. But I wish that I had not included him in this documentary.”

In the midst of responding to the Charlagmagne story, hampton also took the time to address the sexual harassment allegations surrounding Touré, who also contributed to the “Surviving R. Kelly” documentary.

No, I didn't know Toure sexually harassed someone he worked with, I'm not sure how I could have known. He was included because he did the most famous interview with R. Kelly ever. Like Charlamagne, I wish he'd told me.