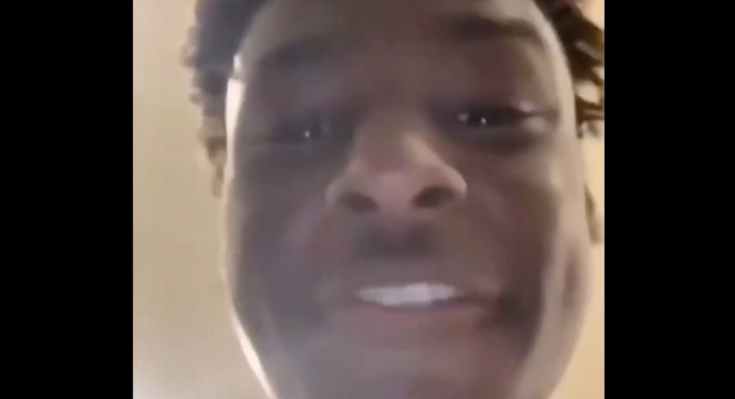 A strange and shocking thing happened when NBA superstar LeBron James told his followers that he gave his eldest child, LeBron “Bronny” James Jr., his own Instagram account. The first-born went berserk. Bronny immediately posted an Instagram Live video where he unfurled a steady stream of obscenities that blew up Twitter.

Things started off innocently enough, with LeBron, 34, introducing his teen son, 14, to his 42M Instagram followers during the Memorial holiday weekend. The father warned the haters in advance to fall back from his son or else the patriarch would “pull up.”

Everyone welcome the heir to the throne to IG @real_bronny! Told him 3 years ago the summer of 2019 I’d let you him get one. Damn time flies! Hahaha! Anyways let’s get Bronny! P.S. Keep y’all hating asses off his comments or we pulling up‼️‼️

Overnight, the teen had already accumulated 1.2M followers on just two photo posts. But it was Bronny James’ shocking video on his Instagram Story that had folks doing double takes, according to HollywoodLife and Heavy.com. Daddy LeBron has been long known for his gratuitous use of curse words to express himself, and the son seems to have inherited his father’s sandpaper tongue.

“Listen up, little f—–. It’s time to make a PSA. Just because she has a pretty face, does not mean she has pretty heart,” Bronny, faking an apparent African accent, began in the video.

Bronny James then raised the decibel levels and intensity before continuing: “These b—— don’t give a f— about a n—-.” Bronny yelled. “You b—- a– b—-.” After unleashing a stream of more profanities, Bronny James added, “All you wanna do is smoke your motherf—— weed away.”

Flip the e-page to check out what Bronny James had to say (NSFW) and how social media recoiled in horror and delirium: