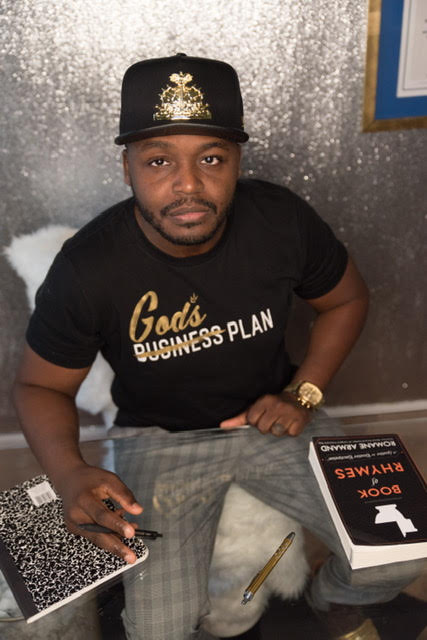 When it comes to rhymes, Romane Armand wrote the book about it.

He spent more than a decade compiling Book of Rhymes: A Laxative for Creative Constipation, a unique 440-page reference guide to help fellow creatives, poets and songwriters quickly find words that rhyme, which he self-published in 2016.

During that decade, Armand also graduated in 2007 with a degree in communcations studies from Brigham Young University and — no small feat — set a Guinness World Record in August 2014 for the longest freestyle rap, continuing to rhyme 24 hours and 49 seconds, breaking the previous record by more than six hours.

Today, the Haitian-born, Massachusetts-raised author is in the process of developing an app version of Book of Rhymes, which is scheduled to be released in 2020.

Rolling out spoke with Armand about his inspiration and creative process.

What inspired you to write Book of Rhymes?

Necessity: I was a songwriter suffering from writer’s block.
Validation: Other songwriters loved the idea so much that they said they’d buy the book.
Innovation: No book like it existed in the market, and I thought it’d be dope to be first.

Do you have a specific writing style?

Songwriting is my foundation. It has the biggest influence on my overall writing style. I write with rhythm, paying close attention to the placement of words and cadence of sentences. I use poetic devices like rhyme, alliteration and repetition. I like imagery and using colorful words.

I started with research and development. I really had no clue about how to write a book and had only read a handful at the time. I read tons of books about the subject and about the publishing industry. The actual process of me coming up with the rhymes in the book consisted of me freestyle rapping in front of a computer for hours at a time.