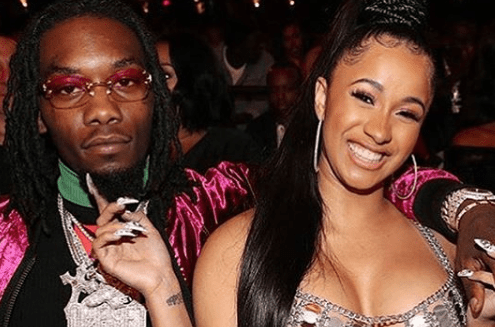 The 25-year-old rapper had previously hinted at her unborn baby’s sex when she spoke to reporters at this year’s Met Gala on Monday, May 7 when she spoke about how feisty the tot is already. Idris Elba has a crush on Meryl Streep. The 43-year-old actor admitted he became so starstruck when he met the 67-year-old actress that he could barely speak. Idris said, “My celebrity crush is Meryl Streep. When I met her, my tongue swelled up in my mouth!” Idris also revealed that he looks for “patience and understanding” […]

The rumor mill is spinning overtime with speculation that there is a riff happening with Jay Z and Kanye West. There are three very key things that lead observers to believe that things aren’t currently kosher between Hov and Yeezy. At this point, it’s lots of speculation, but when you look at the following “issues” […]

Jay Z, Beyoncé and Solange finally released a statement regarding the infamous elevator attack. Although there aren’t many details on why the fight transpired, the statement suggests that they have moved on from the incident. “We love each other and above all we are family. We’ve put this behind us and hope everyone else will […]

Jay Z and Beyonce have issued a statement addressing the surveillance footage of Beyonce’s sister, Solange, punching and kicking Jay in an elevator at the Standard Hotel in New York City. The footage was published by TMZ earlier this week, and set off a firestorm of controversy and speculation regarding what could have possibly triggered Solange’s anger.

Solange, Beyoncé and Jay Z: Is there trouble in paradise?

Story by Stereo Williams Photos by Joi Pearson and Robin Lori Jay Z has had better days. In the same week that Dr. Dre made nearly a billion dollars from the sale of his Beats By Dre headphone empire; and Sean “Diddy” Combs spoke at the commencement for Howard University and was awarded an honorary […]

The Standard Hotel has released a statement regarding the footage’s release, voicing concern that such a breach happened.

10 things we learned from Solange’s attack on Jay Z

Jay Z and Solange’s family scuffle continues to shock and intrigue. In an extended three-minute video, Solange attacks Jay Z several times before Beyoncé’s bodyguard intervenes. Although audio from the video has yet to be released, there were several things that we learned from the short clip. Here are 10 things we learned from Solange’s […]

The Jay Z and Solange scuffle is suddenly becoming the biggest celebrity fight in the age of viral video. In the 53-second clip, Solange attacks Jay Z as Beyonce looks on in shock and her body guard attempts to break up the scuffle. Shortly after the video was release, Twitter users voiced their thoughts. Here […]

Janelle Monae and Beyoncé’s Instagram photos from the Met Gala

Janelle Monae, Beyoncé, Erykah Badu and Solange found a few minutes during the Met Gala in New York  to snap a few selfies for Instagram. You can tell that they all had a great time and loved every minute that the #electricladies were able to spend together. Check out more photos from Monae and Beyoncé’s […]

First lady Michelle Obama cutting the ribbon to the new Anna Wintour Costume Institute as well as scenes from inside the Charles James: Beyond Fashion exhibition at the Metropolitan Museum of Art on Monday, May 5, 2014.

Sophistication and elegance are required when you are on the red carpet at the Met Gala, and Kim Kardashain, Beyoncé, Rihanna and more brought that and then some. Sleek and stylish hair and natural flawless makeup made these ladies stand out. Check out the other ladies who made the list in the gallery. –joi pearson […]

Miley Cyrus’ years in the limelight from age 13 to now

Miley Cyrus has transformed not only her look but her career since her first gig at 13 on Disney’s “Hannah Montana”. Check out her transformation to 2014 below. –Joi Pearson

Kanye West attacks paparazzi after bumping his head on a sign

Kanye West has just experienced one embarrassing week. Early in the week at the Met Gala, his girl friend, Kim Kardashian, made them both look bad by wearing a dress that resembled an old fashion couch. Well things didn’t get better on Friday. While walking to an eatery with Kim Kardashian, Kanye held his head […]

Inside the Met Gala afterparty

Many celebrities kept the Met Gala going at the afterparty. The stars flocked to the Standford Hotel to the Boom Boom Room after the ball.  Many celebrities changed from their elegant ball gowns to their party wear. Madonna, for example, decided to strip down to her lingerie.Tyson Bedford thought it was appropriate to wear a pink camouflage suit to […]

Kanye West made headlines for performing his new single “I Am God” and defending Kim Kardashian at the Met Gala. However, some are saying that Kanye West was completely embarrassed by Kardashian’s awful dress. According to “Life & Style,” Kardashian had her Givenchy dress altered at the last minute because she didn’t want her arms to […]

Celebrities take photos at the 2013 Met Ball  Before, during, and after the 2013 Met Ball, social media was flooded with celebrity taken photographs. As previously reported, the theme for the evening was punk to commemorate the museum’s spring exhibition PUNK: Chaos to Couture. Several celebs stepped out in high fashion garb that included designers Givenchy, as seen […]

Best and worst dressed at the 2013 Met Gala

Best and worst dressed at the Met Gala Celebs swarmed New York’s Metropolitan Museum of Art Monday, May 6, for the 2013 Met Gala. Easily one of the biggest fashion events of the year, Monday’s event included a punk theme to preview the museum’s spring exhibition PUNK: Chaos to Couture. Sticking to the theme was Madonna, […]

With the biggest stars in entertainment in the same room at the 2013 Met Gala, Kanye West reigned as the top celebrity.  Before the event, Kanye appeared happier than usual while standing next to a very pregnant Kim Kardashian on the red carpet. During the actual gala, Kanye West was the headlining act. According to […]

2013 Met Ball photos Celebrities are currently flocking to the Metropolitan Museum of Art for the 2013 Met gala. Spotted on the red carpet so far are the like of Kanye West and Kim Kardashian [pictured above] as well as Nicki Minaj and Beyonce. Also seen was Solange Knowles, Joan Smalls, Angela Simmons and Kerry […]