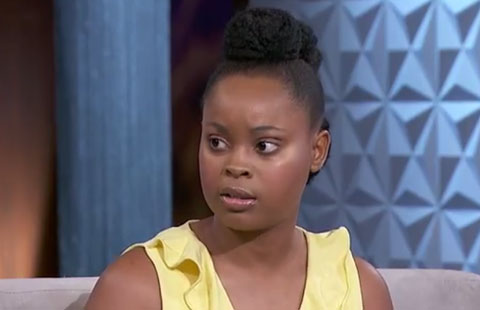 An alleged former captive in R&B singer R. Kelly’s alleged sex cult has come forward. Jerhonda Pace, 24, claims she met R. Kelly at the age of 16, during his infamous 2008 child pornography trial. Soon Pace found herself in Kelly’s innermost circles that led to a fateful night on a tour bus.

According to an interview she gave to the daytime talk show “The Real,” Pace entered the bus and found R. Kelly and another woman naked. According to Pace, the woman was there to show her how to please Kelly sexually. She said during the interview that she engaged in lesbian sex acts while Kelly told her to take her clothes off and relax. For Pace, it was a nervous encounter but she said that “Rob” (Kelly) had already taken her virginity, so she wanted to please him but was unsure of what was going on.

Pace went on to say that the woman taught her techniques that R. Kelly enjoyed as well as things that she enjoyed during sex. Pace stated that R. Kelly was physically abusive to her and had slapped her in the face and locked her in rooms for days when she displeased him. During her time with the singer, she claims that she saw other women held captive by the singer in homes across the country. According to Pace, she escaped from Kelly in 2010  by lying to him about getting a pair of shoes. She was allowed to leave the residence and never returned.

But Pace is concerned that a friend of hers and others who may still be held captive by the singer. This has made her speak out on their behalf.

Pace said that many of her sexual encounters with Kelly were filmed by the singer. The legal age of consent in Illinois is 17 and at the age of 16 when she had sex with Kelly she was underage.