It was a celebration down to “The ⭕” today as the ladies introduced and embraced Miss Quad during her first televised appearance as a member of Delta Sigma Theta! 🔺🔺🔺🔺🔺🔺 Welcome to Greekdom Miss Quad! @absolutelyquad @rashanali @syleenajohnson @kianadancie #SisterCircleTV #NPHC #GreekLife #GreekLove #AKA #DST #ZPB 💗❤💙

On the Monday, April 9 episode of Sister Circle, host Quad Webb-Lunceford announced she was recently initiated into Delta Sigma Theta Sorority Incorporated, the second oldest Black Greek letter sorority in the National Pan-Hellenic Conference. Her co-hosts Rashan Ali and Syleena Johnson joined her during the announcement, each of them showcasing their paraphernalia for their sororities, Alpha Kappa Alpha Sorority and Zeta Phi Beta Sorority, respectively. 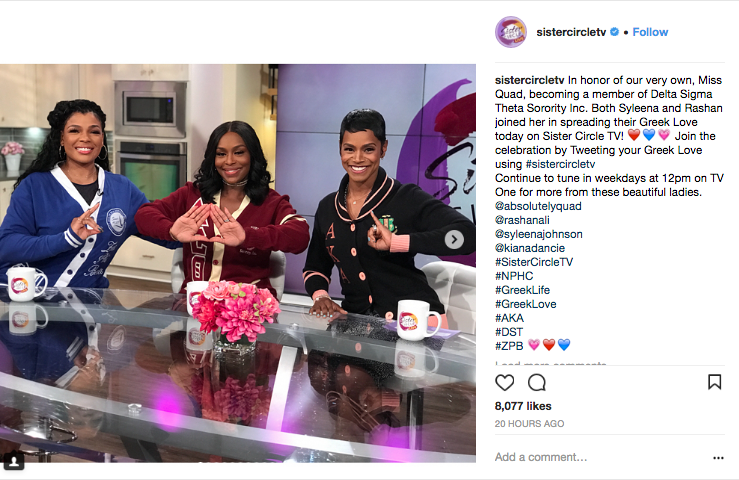 Webb-Lunceford is a member of the Atlanta Suburban Alumnae Chapter and was initiated on Saturday, April 7, 2018. Welcome to the sisterhood!