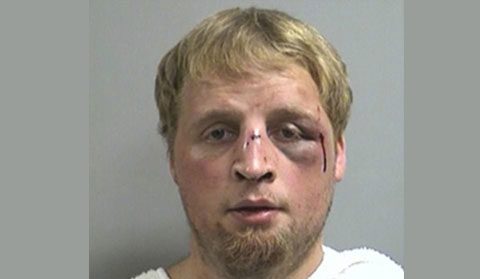 A betrayal of trust and the sexual abuse of a toddler have led to what some would call a justifiable beating and the subsequent arrest of a Missouri man. Jayson Newlun, 26, was a guest at the residence of his friends in North Kansas City, Missouri and had been at the home several days last week when his host asked for a favor.

The husband and wife needed to go shopping and their one-year-old daughter was asleep, so they asked Newlun to watch the baby while they went to the store. According to KMBC-9 News, the mother realized she had left her WIC vouchers and needed to return home after being gone about 15 minutes. When she returned home, she noticed Newlun was not on the couch and the door to her daughter’s bedroom was open. She went into the bedroom and saw Newlun take an inappropriate picture with her daughter, touching the child’s genitals and masturbating. The mother immediately went and got her husband who ran into the house to rescue his daughter. When Newlun saw the baby’s father coming, he screamed in terror and was tackled to the floor. That’s when the father took a dresser drawer and began beating Newlun with the furniture. He repeatedly beat and punched Newlun until a neighbor came to the home and pulled the enraged father off of the alleged pedophile. After beating Newlun, the family then called the police to the scene.

The mother stated to police that while she was waiting for officers to arrive, she asked Newlun why he would do something like this. He told her he didn’t know. She reportedly told him, “I hope you go down for this.” He replied, “I do, too.”

Newlun has been charged with statutory sodomy of a one-year-old girl and is being held on $250K bail at the Clay County Detention Center in Missouri.